Hungary’s rough sleepers go into hiding as homelessness made illegal 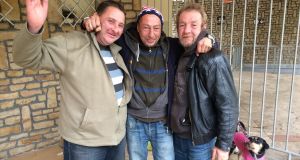 The leaves lie thick now around Lake Feneketlen in Budapest, and the gates are locked on the open-air theatre where football fans spent warm summer evenings watching World Cup football over burgers and beer.

But this is still where Leonard Hollo, Istvan Gajdos and Janos Somloi spend their days and nights, three homeless men to whom a draconian new Hungarian law has – at least until now – made as little difference as the changing seasons.

“I know it sounds strange, but I like living rough,” declares Hollo (40), who says he has spent time in the police, the army and prison.

“I’ve lived around here for nine years and there are people who give me food. The police came up to us yesterday and gave us a bit of hassle. But I told them I was a normal citizen of Hungary and had the right to sit on a bench with my dog.”

Under a law that came into force on October 15th, however, homelessness is now effectively illegal in Hungary, in accordance with a change to the national constitution that forbids “habitual residence in a public space”.

The police can now issue warnings to people they find sleeping rough, and after three such cautions a homeless person is taken into custody and held for up to 72 hours.

In an accelerated court process, those found guilty of breaking the new law are most likely to be given a formal warning in the first instance; if they are caught again they will be given community service; and if arrested for a third time – and on each subsequent occasion – they face a spell in jail of up to 60 days.

The government of prime minister Viktor Orban, a populist and proudly “illiberal” prime minister, insists it wants to make Hungary’s streets safer and cleaner, while ensuring that homeless people use state shelters.

Yet critics point out that Hungary has far more homeless people than places available in shelters; that these facilities are often dirty and dangerous; and that social housing for the poor is vanishing across the country.

At the same time, many observers see the homeless are the latest easy targets for a government that has already demonised migrants, NGOs, liberal philanthropist George Soros and the European Union – all while distracting attention from corruption allegations and the parlous state of Hungary’s public services.

Since the law took effect, about 200 homeless people have received police warnings and at least four have been arrested; in the cases completed so far, the courts have handed down formal cautions.

One of those tried was a 61-year-old woman arrested in Budapest after receiving three warnings in the space of just a few hours and a few hundred metres.

Following the death of her partner earlier this year, she was forced to leave the home they had shared and ended up sleeping in a local park.

After the court gave her a caution, she went straight back to living rough, says Flora Kollarics, a lawyer with Utcajogasz, or Street Law, which provides free legal help to poor people with housing problems.

“I think the police are trying to behave humanely but they have to follow the rules,” says Ms Kollarics, whose colleagues are appealing against the verdict and plan to challenge the law in Hungary’s constitutional court.

“I think the police are also fed up with the legislation. This isn’t what they should be doing, it’s the wrong institution to use against homeless people.”

Every Friday afternoon, Utcajogasz’s volunteer lawyers offer advice to the poor and homeless at Blaha Luiza square in central Budapest, a customary gathering place for rough sleepers that has emptied out since the law took effect.

“They have disappeared from the parks and squares where you could see them before,” says Tessza Udvarhelyi of housing advocacy group A Varos Mindenkie, or The City is for All.

“We believe homeless people went to hide somewhere else, in less visible places away from the city centres, because the demand for shelters hasn’t really grown . . . They’re moving to places where we can’t see them, which is dangerous.”

The law appears to be driving homeless people away from the few services that are available to them, just as Hungary’s hard winter approaches.

The City is for All estimates there are about 10,000 shelter places for some 30,000 homeless people in Hungary, and says the law has not been accompanied by any major change in the quality or quantity of such facilities, which have a reputation for being bug-ridden and unsafe.

Social accommodation makes up only 2 per cent of Hungary’s housing stock and councils have no legal obligation to provide it, so many local authorities simply sell it off to make money and rid themselves of poor and “problematic” citizens.

“This government has been trying for a long time to long time to ‘clean’ the streets, and has this idea of dividing Hungarians into ‘deserving’ and ‘underserving’ people,” says Udvarhelyi.

“The whole political logic of this government is based on the creation of an enemy – refugees or NGOs or homeless people . . . so they don’t have to talk about the real problems of Hungarians,” she adds.

“The law goes against the whole ethos of social assistance, which should be voluntary. It’s like the poorhouse of the 19th century, when people were forced get help.”