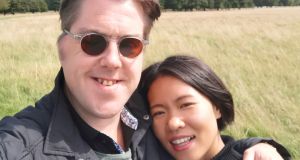 Michael McGreal from Westport, Co Mayo, and his Chinese wife Laura Liu: ‘I’m annoyed about this. It creates a situation where your mind knows what’s best but your heart rules.’ Photograph courtesy Michael McGreal

The Irish Embassy in China is exploring options to evacuate the Irish nationals under lockdown in Wuhan due to the coronavirus, but the offer poses a dilemma for those in the stricken city as their Chinese partners would be left behind and anyone leaving would face another period under quarantine once they got out of the affected area.

Michael McGreal, from Westport, Co Mayo, who is one of the at least six Irish nationals known to be in the affected Hubei province, was informed by the Irish Embassy in Beijing on Monday night that it was looking for ways to fly the Irish out of the area.

“We are currently exploring a number of commercial flight options with other countries to potentially allow travel from Wuhan during the current lockdown. To help our planning in this, we would appreciate if you could let us know whether you would be interested in availing of a seat on such a flight, if it is possible to arrange,” a note from the embassy said.

The note added that: “As you know, travel to and from Wuhan is controlled by the Chinese authorities, and we are exploring this possibility with them and will continue communications with them to see what options exist as the situation unfolds.”

The Irish in the area, who have been under lockdown in their homes since Thursday, were also told that they would likely have to go through a period of quarantine once they were flown out of the country.

“You should also be aware that there is a likelihood that any travel from Wuhan would be followed by a period in quarantine controls,” the embassy note said.

Mr McGreal, who has been in Wuhan for 12 years and is married to a Chinese national, said he was very grateful the embassy was making efforts to give people the option to leave, but he felt obliged to stay as the Chinese government would not let his wife fly out too under the current travel restrictions.

“I won’t take it. My wife can’t board,” he said, “I’m annoyed about this. It creates a situation where your mind knows what’s best but your heart rules.”

The small group of Irish left in the city have formed a WeChat social media group – known as “The Wuhan Six” – to compare notes and discuss options, he said.

The majority of the group have Chinese spouses or partners, Mr McGreal said. “Mostly everyone wants to stick it out with their girlfriend or wife,” he said, adding that he felt perhaps only one member of the group, who was single, had suggested he might avail of the evacuation offer.

The embassy is dispensing masks to the Irish in Wuhan who badly need it . . . That’s a huge help

Another issue was leaving a city where they had been cooped up for days, only to fly to another quarantine situation at home.

There has been a dire shortage of surgical masks across China, but particularly in Hubei, since the coronavirus struck and took the lives of at least 61 and infected nearly 3,000.

Even though it seemed most were not going to avail of the evacuation offer, the Irish group in Wuhan was very pleased that an option was in the pipeline, he said.

As of late Monday night, the estimated 300 British in the province had not received any notification from their government about evacuation, he said, and “the Brits in Wuhan are absolutely losing their heads”.

Mr McGreal posted the Irish Embassy note in a British social media group, and they “are going crazy . . . They can’t believe no offer has been made to them,” he said.

“Compared to the actions of the British government in regards to getting an evacuation for their citizens, this makes me proud to be Irish,” he said.