Mnangagwa on track for narrow win in Zimbabwe election 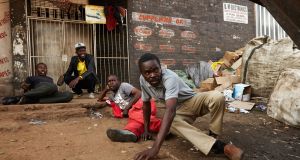 Citizens hide from Zimbabwean soldiers in the streets of Harare, on August 1st, 2018 after protests erupted over alleged fraud in the country’s election. Photograph: Alex McBride/AFP/Getty Images 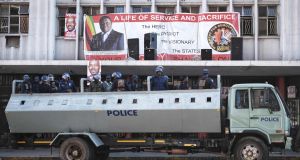 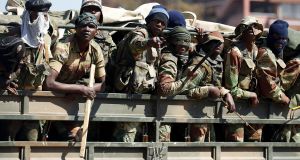 Members of the military gesture patrol the streets of Harare on Thursday. Photograph: Siphiwe Sibeko/Reuters 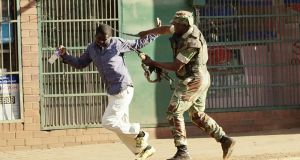 A Zimbabwean soldier beats a man on a street in Harare on Wednesday. Photograph: Zinyange Auntony/AFP/Getty Images

Emmerson Mnangagwa, Zimbabwe’s president and the leader of the ruling Zanu-PF party, appears on track to achieve a narrow win and avoid a run-off in the country’s historic and hotly contested presidential election.

Officials from Zimbabwe’s electoral commission (ZEC) announced late on Thursday night that Mnangagwa had received about 2.15 million votes out of approximately 4 million cast in nine out of 10 provinces where counts had been completed.

Results for the final province, Mashonaland West, which has 600,000 registered voters and is known as a Zanu-PF stronghold, are likely to be declared early on Friday morning. Nelson Chamisa, the candidate of the opposition Movement for Democratic Change (MDC), won 1.93 million votes in the nine provinces, the ZEC said.

But Reuters reports that the MDC has rejected the presidential result because it was not able to verify the results.

Meanwhile, police in Zimbabwe have launched a crackdown on opposition leaders, raiding their headquarters and accusing them of inciting violence during protests in the capital, Harare, that left six dead.

A search warrant issued by a city magistrate said Nelson Chamisa, the leader of the opposition Movement for Democratic Change (MDC), and several others, are suspected of the crimes of “possession of dangerous weapons” and “public violence”.

The warrant authorised police to search for and confiscate any evidence, including computers and documents, as part of their investigation.

The main headquarters of the MDC were shuttered on Thursday and guarded by a heavy contingent of police officers. Sixteen MDC workers were taken away by the police for questioning, a party official said.

Throughout the day, the army patrolled the streets of Harare, after three people were shot dead on Wednesday when soldiers and police fought running battles with hundreds of protesters, firing live ammunition, teargas and water cannon. Another three died of their injuries on Thursday, police said.

The protests were prompted by opposition fears that the count from Monday’s historic presidential election , the first since the fall of Robert Mugabe last year, was being rigged.

I wish to extend my sincere condolences to the families of the victims of yesterday’s violence. All human life is sacred, and their deaths are a tragedy, irrespective of the circumstances. I would also like to wish a speedy recovery to all those injured in yesterday’s events

The police raid came as the Zimbabwe Electoral Commission said it would start announcing results from 10pm (9pm Irish time).

The election pitted Mr Chamisa, a 40-year-old lawyer and pastor, against Emmerson Mnangagwa (75), who was a longtime Mugabe aide in the ruling Zanu-PF party before replacing him as president.

“Police came with a warrant of search and seizure,” said MDC lawyer Denford Halimani. “They claimed there were certain computers and other subversive materials. They wanted to seize those things and also get people that were inside. Perhaps it was a scare tactic. There was nothing the police retrieved.”

MDC sources said they feared the raids were aimed at preventing the party establishing its own independent count of results in Monday’s poll, billed as the beginning of a new era for the impoverished country. A team at the headquarters had been collating forms from polling stations across the country to compile a tally to compare with that released by ZEC.

“I have been representing clients against Zanu for 35 years and these are classic Zanu tactics,” said David Coltart, a founder member of the MDC.

The main post office, banks and many shops in Harare remained closed following Wednesday’s chaos. Traffic remained light and military helicopters flew overhead, with scattered debris and scorch marks betraying the scenes of violence from the day before.

“We are scared,” said Mildred Masara, a hotel worker. “We don’t know what’s going to happen now. I have to earn a living but I would like to be at home now.”

It is unclear who ordered the troops on to the streets to clear the unarmed protesters on Wednesday, but the clashes and resultant casualties are a huge blow to efforts by Zanu-PF to improve its image overseas.

Diplomats and western officials in Harare said Mr Mnangagwa did not appear to have been responsible for the decision. This suggests significant divisions among the top officials of the ruling party over how to deal with angry and fearful opposition supporters.

Mr Mnangagwa tweeted on Thursday that he had been “in communication” with Chamisa “to discuss how to immediately diffuse [sic] the situation, and we must maintain this dialogue in order to protect the peace we hold dear”.

He called for an independent investigation into the deaths on Wednesday and extended condolences to the families of the victims. “This land is home to all of us and we will sink or swim together,” he said.

In a series of media interviews, Mr Chamisa criticised what he called a “violent government”, called for calm and repeated that he was very confident of forming the next government.

The MDC leader denied there had been any communication with Mnangagwa and said his party would do “a lot of things within the confines of legality and the constitution to defend our vote” if ZEC announced its defeat.

“Our people are already on the streets. They are jobless. That’s where they stay. If anything, we will need to call them off the streets ... There has got to be a government of the people”, Chamisa said.

Though Mr Mnangagwa’s earlier conciliatory statements reassured some observers in Harare, there is great anxiety among ordinary people around the country about what may happen in the coming days.

The electoral commission, which has until Saturday to declare the winner, according to the law, has repeatedly denied it had allowed Zanu-PF to rig the vote. There was “absolutely no skulduggery”, the deputy chairman, Emmanuel Magade, told a press conference.

A joint statement by foreign election observers expressed “grave concern” over Wednesday’s deadly violence and urged the electoral commission to release the full results “expeditiously” and in a transparent manner.

John Dramani Mahama, a former president of Ghana who leads the Commonwealth observer mission to Zimbabwe, said the use of force by the Zimbabwean army was excessive and that the length of time taken to release results in the presidential poll was a concern.

Bright Matonga, a former ruling party minister, defended the delay. “The whole world is watching us. We cannot go outside the law. We cannot make a mistake. We want to make Zimbabwe an example of democracy in Africa, ” he said. – Guardian/Reuters