Mnangagwa off to rocky start as Zimbabwe’s elected leader 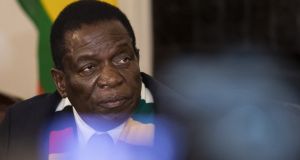 Emmerson Mnangagwa’s tenure as Zimbabwe’s newly elected president has got off to a rocky start.

He narrowly secured a five-year term in an election marred by opposition allegations of rigging and the deaths of six people when soldiers fired live rounds at protesters in the capital, Harare. Details of election flaws were outlined by observers from Western nations, whose support is needed to rebuild an economy beset by mass unemployment, dire cash shortages and crumbling infrastructure after two decades of misrule under Robert Mugabe.

“Mnangagwa has to start from scratch and prove he is not another demagogue like Mugabe,” said Rashweat Mukundu, a political analyst at the Zimbabwe Democracy Institute. “His legitimacy will continue to be questioned in some circles, and investors may have watched the election with scepticism, especially the violence.”

A former spy chief and deputy president, the 75-year-old Mnangagwa took office in November after the military seized control of the country and the ruling party forced Mugabe to step down. He pledged to hold credible elections, declared the country open for business and assured investors that land grabs that started in 2000 and triggered the southern African nation’s economic collapse were a thing of the past.

The new administration’s targets include an annual economic growth rate of at least 6 per cent over the next five years, attracting $5 billion (€4.3 billion) in foreign direct investment and $10 billion in domestic investment a year.

That’s going to be easier said than done. The International Monetary Fund sees the $17.5 billion economy growing an average of 4.2 per cent a year through to 2022, and the nation secured just $289 million of foreign direct investment last year, according to the United Nations Conference on Trade and Development.

Cash shortages are a major constraint on growth and deterrent to investment. More than 98 per cent of transactions are conducted via electronic transfers, and banks limit withdrawals, making it difficult for business to pay wages on time.

Finances in a mess

Zimbabwe has relied mainly on the US dollar since scrapping its own currency in 2009 to halt hyperinflation that saw prices double every day. The government’s introduction of bond notes, a dollar-backed quasi-currency, to ease the liquidity crisis has helped little.

The state’s finances are also in a mess. It spends almost the entire national budget on wages for its 350,000 employees and owns about 100 cash-strapped and largely dysfunctional companies, while a broke Treasury battles to collect tax revenue.

Zimbabwe is also saddled with $1.7 billion of arrears owed to the African Development Bank and World Bank that it needs to clear before it can tap new loans from multilateral lenders.

“Ultimately, they will need to try and secure donor financing through grants or concessional loans, or even a commercial bridge loan, that will allow them to clear outstanding arrears to multilateral institutions, which will pave the way forward to achieving debt relief,” said Christopher Dielmann, an economist at Exotix Capital.

Robert Besseling, executive director of political risk advisory firm EXX Africa, expects the fallout over the disputed elections will probably subside, enabling the government to begin repairing its reputation and court investments and debt relief. Significant inflows from the European Union and US may depend on a commitment by Mnangagwa’s administration to a debt-repayment plan and possibly reaching out to the opposition, he said.

“Further outbreaks of violent unrest in Harare are less likely due to the heavy-handed security crackdown in the capital and other cities,” Besseling said. “While the opposition will seek to remain relevant by staging demonstrations, attendance will be smaller than in previous days.”

Mnangagwa may find his room for manoeuvre limited by his small margin of victory and the main opposition candidate’s strong showing. Nelson Chamisa won 44 per cent of the vote, just six months after he took charge of the main opposition Movement for Democratic Change following the death of its founding leader, Morgan Tsvangirai.

The president will need to make conciliatory overtures to his political opponents if he’s to get the country back on track, said Prosper Chitambara, a researcher at the Labor and Economic Research Institute in Harare.

“The most immediate challenge for the winner is uniting the nation so that there is cohesion and common purpose to tackle the larger task of rebuilding our ruined economy,” he said. – Bloomberg