Saudis, UAE and Egypt willing to embrace Assad if it curbs influence of Iran and Turkey 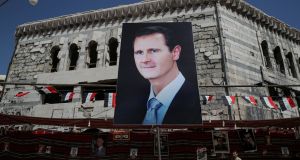 Saudi Arabia, the United Arab Emirates and Egypt have begun to normalise relations with Syrian president Bashar al-Assad with the aim of reducing Iran’s influence in the Levant and countering Turkey’s military presence in Syria.

During a meeting in the Gulf last month of intelligence chiefs from the three, and, reportedly, from Israel, it was decided to return the ambassadors of the three Arab states to Damascus.

This was followed by a mid-December arrival in the Syrian capital of Sudan’s president Omar al-Bashir, the first official visit by an Arab ruler since warfare erupted in March 2011. Bashir’s meeting with Assad was followed by a trip to Cairo by Syrian security adviser Ali Mamlouk.

Emirati deputy head of intelligence Ali al-Shamsi spent a week in Damascus before the UAE embassy reopened at the end of December. The UAE was chosen to begin the process of restoring relations because it did not follow the Saudi, Qatari and Kuwaiti examples by providing aid to Syrian insurgents and local and foreign jihadis seeking to oust Assad. Both Saudi Arabia and Qatar also supported the Syrian political opposition.

Saudi Arabia indicated its backing for reconciliation by encouraging its ally Bashir to travel to Damascus and urging Bahrain, a Saudi protectorate, to be the second Arab country to reopen its mission in Damascus.

Riyadh formed the opposition teams in previous rounds of talks, so the opposition could now be adopted by Turkey. The Free Syrian Army’s mostly jihadi fighters have joined the Turkish-sponsored National Liberation Army operating in northern Syria.

In exchange for curbing Iranian influence, Syria would return to the Arab League, perhaps in time for the March summit in Tunisia. The Arab states would back Damascus’s efforts to pressure Turkey to withdraw from areas it occupies in northern Syria and fend off a Turkish attack on Syrian Kurdish fighters based in a wide band of territory along the Syrian-Turkish border.

Syria will also expect Saudi and Emirati financial aid and investment for the reconstruction of its damaged and devastated cities and support for its cash-strapped economy. Unless Syria rebuilds, it will become a failed state like Iraq and prey to radical fundamentalist movements such as Islamic State, which emerged in Iraq after the 2003 US invasion and occupation of that country.

Unless Syria recovers, millions of Syrian refugees will stay in host countries Lebanon and Jordan, creating tension, straining their slender resources and destabilising the Levant. Following the collapse of Iraq, Syria was, until unrest erupted, the stable core of this strategic region.

Arab restoration of relations with Syria is not as unlikely as it might seem. Although the Arab League suspended Syrian membership in 2011 and Arab embassies closed, Egypt and Algeria never cut connections with Syria. High-ranking Egyptian and Algerian military officers travelled to Damascus to consult on strategy with Syrian counterparts.

Lebanon’s Hizbullah reinforced the Syrian army in its battles against insurgents and jihadis while the country’s border remained open to refugees and Syrians travelling elsewhere. Iraq dispatched militiamen to fight alongside Syria’s army.

When Jordan reopened its main border crossing with Syria in October last year, thousands of Jordanians flocked to Damascus and trade promptly resumed.