Mayor of Gdansk dies after stabbing at concert 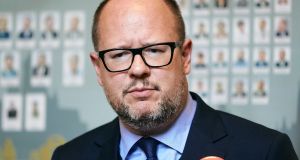 The mayor of Poland’s northern city of Gdansk has died after he was stabbed at a charity event on Sunday evening.

Pawel Adamowicz (53), mayor of the city for 20 years, was attacked before thousands of people during a charity concert.

Polish media have identified the man behind the attack as Stefan W, a 27-year-old local man with a history of violent crime.

Mr Adamowicz was rushed to hospital for a five-hour emergency operation. Doctors say he suffered serious wounds to his internal organs, including heart and diaphragm and spent the night in a critical condition. On Monday afternoon Poland’s health minister Lukasz Szumowski confirmed the mayor had died from his injuries.

“Despite all our efforts, it wasn’t possible to save him,” said Dr Tomasz Stefaniak.

Marches were called across Poland in solidarity with the liberal mayor: a supporter of migrants and LGBT rights, and a vocal opponent of Poland’s national conservative government.

The killing has shocked the nation and sparked a heated public debate about Poland’s increasingly crude and polarised public discourse in recent years.

Prime minister Mateusz Morawiecki, of the ruling Law and Justice (PiS) party, described the mayor’s death as a “huge tragedy” for the country.

President Andrzej Duda wrote on Twitter: “Hostility and violence have brought the most tragic result and pain. This is something we must not accept.”

From 2007 to 2015 Mr Adamowicz was a member of Poland’s pro-European Civic Platform (PO), the main political opponent of PiS, until he left the party to contest local elections as an independent candidate.

Moments before the attack, Mr Adamowicz posted an image on Instagram from the stage of the Gdansk venue. Video footage of the attack – on social media – shows the assailant rushing the stage and scuffling with the mayor.

The pre-recorded music continued but singing dwindled and died out down as it became clear what had just happened on the stage.

The attacker, convicted and imprisoned in 2014 for violent assault, can be seen making a gesture of triumph after the stabbing as he strutted around the stage.

The man was then overpowered by security staff.

A cameraman working at the event, Krzysztof Wojtczk, said the attack was over before anyone knew what had happened. “Suddenly someone appeared on the stage, pushed his way through the crowd standing there and ran to the mayor,” Mr Wojtczk told Polish television. “The man stabbed the mayor in the chest with full force.”

Sunday’s concert in Gdansk, one of dozens across the country, was part of a 27-year tradition: the Great Orchestra of Christmas Charity. Since its foundation the charity has raised more than 950 million zloty (€221 million) for state-run hospitals to buy medical equipment.