US president Donald Trump on Monday (January 14) denied media reports regarding the Russia investigation and his meetings with Russian President Vladimir Putin, telling reporters he never worked for Russia. Video: The White House 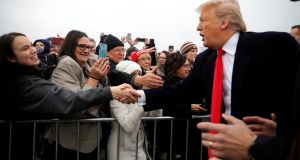 US president Donald Trump’s nominee for attorney general has pledged to allow special counsel Robert Mueller to complete his investigation into Russian interference in the 2016 election.

William Barr, who needs Senate approval to be confirmed as the US’s top justice official, will begin two days of testimony before the chamber’s judiciary committee on Tuesday.

“On my watch, Bob will be allowed to complete his work,” Mr Barr said in prepared remarks released on the eve of the hearing.

His statement was released shortly before Mr Trump denied to reporters that he had ever worked for Russia.

He was speaking following a report in the New York Times that the FBI opened an investigation into his ties with Russia after he fired the agency’s director James Comey in 2017.

“Not only did I never work for Russia, I think it’s a disgrace that you even asked that question because it’s a whole big fat hoax,” he said in response to a question from a reporter.

Mr Barr, who is Mr Trump’s nominee to replace Jeff Sessions as attorney general, attracted criticism from Democrats for a memo he wrote last year in which he suggested that Mr Mueller may be exceeding his remit in investigating the president for obstruction of justice.

Mr Barr pre-empted expected questioning by senators on the topic in his prepared remarks to the judiciary committee, saying the memo referred to only one aspect of the Mueller investigation.

“The memo did not address – or in any way question – the special counsel’s core investigation,” he wrote.

“It is in the best interest of everyone – the president, Congress, and, most importantly, the American people – that this matter be resolved by allowing the special counsel to complete his work,” he said.

“The country needs a credible resolution of these issues. If confirmed, I will not permit partisan politics, personal interests, or any other improper consideration to interfere with this or any other investigation.”

Mr Sessions was fired in November. Mr Trump had consistently criticised the former senator for recusing himself from the Russia investigation.

Though the appointment of Mr Barr would be the latest personnel change at the top of the Trump administration, it would not be his first time in the job. The 68-year-old served as attorney general during George HW Bush’s presidency. Well-known for his expansive views on executive power, he has long been an advocate of presidential authority – a view that many of Mr Trump’s opponents believe was one reason he was chosen for the post.

Speaking as he departed the White House for Louisiana where he addressed the American Farm Bureau Federation’s annual convention, Mr Trump – in addition to denying he had ever worked for Russia – hit out at former senior figures in the FBI.

Mr Comey was a “bad cop and he was a dirty cop,” he said, while former deputy FBI director Andrew McCabe was “a proven liar and was fired from the FBI”.

In his speech to farmers in Louisiana, Mr Trump addressed the ongoing impasse over funding for his border wall which has led to the government shutdown.

He also told his audience that he would make it easier for immigrants who worked on farms in the US to stay in the country and criticised the current visa lottery programme.