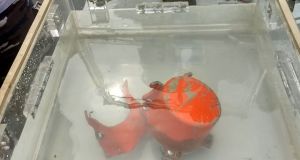 Indonesian authorities on Monday said they will immediately begin to download contents of a cockpit voice recorder (CVR) from a Lion Air jet that crashed into the sea near Jakarta more than two months ago, killing all 189 people on board.

The crash was the world’s first of a Boeing Co 737 MAX jet and the deadliest of 2018, and the recovery of the aircraft’s second black box from the Java Sea north of Jakarta on Monday may provide an account of the last actions of the jet’s pilots.

“We have our own laboratory and personnel to do it,” Haryo Satmiko, deputy chief of the transportation safety committee, told Reuters.

Mr Satmiko said it had in the past taken up to three months to download, analyse and transcribe the contents of recorders.

Contact with flight JT610 was lost 13 minutes after it took off on October 29th from the capital, Jakarta, heading north to the tin-mining town of Pangkal Pinang.

A preliminary report by Indonesia’s transport safety commission focused on airline maintenance and training, as well as the response of a Boeing anti-stall system and a recently replaced sensor, but did not give a cause for the crash.

A group of relatives of victims urged the transportation safety committee to reveal “everything that was recorded” and to work independently.

Navy Lieutenant Colonel Agung Nugroho told Reuters a weak signal from the recorder was detected several days ago and it was found buried deep in soft mud on the sea floor in water about 30 metres deep.

“We don’t know what damage there is but it has obvious scratches on it,” Lieut Col Nugroho said.

Pictures supplied by an official from the transportation agency showed chipped bright orange paint on the CVR memory unit, but no major dents.

Nurcahyo Utomo, an investigator at the safety committee, told reporters it should take no more than five days to download the data, but if there was a problem the CVR would be sent to the manufacturer.

“We hope it can be done as soon as possible because all the Boeing operators are waiting,” said Mr Utomo, adding that investigators hoped to complete the full report within a year of the crash.

With the recovery of the CVR, officials said there was no plan to continue searching for other parts of the wrecked plane, including an angle of attack sensor that was suspected to have been faulty.

Lieut Col Nugroho said human remains had been found near the location of the CVR, about 50 metres from where the crashed jet’s other black box, the flight data recorder, was found three days after the crash. – Reuters