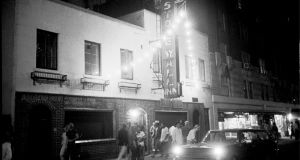 The front of the Stonewall Inn, pictured five nights after a raid by police at the bar in 1969 that triggered a riot. File photograph: Larry Morris/The New York Times

New York’s police commissioner apologised on Thursday for the raid on the Stonewall Inn gay bar 50 years ago that led to a riot and gave rise to the modern LGBT rights movement, describing the incident as “harassment” that was “wrong, plain and simple”.

Patrons of the bar fought back against the raid on June 28th, 1969, leading to unprecedented demonstrations for the rights of lesbian, gay, bisexual and transgender (LGBT) people in the streets of Greenwich Village outside the Stonewall Inn.

“What happened should not have happened. The actions taken by the NYPD were wrong, plain and simple,” NYPD commissioner James O’Neill said. “The actions and the laws were discriminatory and oppressive, and for that, I apologise.”

Gay pride is now celebrated across the world in June, with parades usually scheduled on or around the June 28th anniversary of the incident.

Organisers expect some 4 million people to visit New York later this month for World Pride, an international gay pride celebration that will be held in New York this year to commemorate the 50th anniversary of the Stonewall uprising.