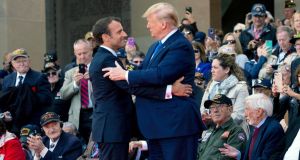 President Emmanuel Macron issued a thinly-veiled rebuke to Donald Trump at D-Day commemorations in Normandy on Thursday, saying leaders “owe it to those who fought” to support the post second World War multilateral system.

The French president spoke in the cemetery at Colleville-sur-Mer, where 9,387 US servicemen are buried. “Dear Donald Trump, the United States is never greater than when it fights for the freedom of others,” he said.

“The United States is never greater than when it shows . . . loyalty to the universal values that the founding fathers defended, when nearly 2½ centuries ago France came to support its independence.”

Mr Trump showed displeasure by rolling, then closing, his eyes, crossing his arms and sinking back into his chair.

Mr Macron called the commitment to multilateralism “the promise of Normandy”, after the largest amphibious landing in history, in which 132,700 allied troops took horrific casualties to begin the liberation of the continent from Nazi Germany.

Not for the first time, Mr Macron gave the impression that he, not Mr Trump, is the “leader of the free world”. The two men have clashed over the US president’s renunciation of the 2016 Paris climate accord and the 2015 nuclear agreement with Iran.

Mr Macron has also been alarmed by Mr Trump’s claims that Nato is obsolete, his attempt to withdraw all US forces from Syria and his support for Brexit.

Yet despite numerous policy differences and diametrically opposed personalities, the French and US leaders appear to have recovered from a low point in relations last November, when Mr Macron spoke sharply of the dangers of nationalism and populism at first World War commemorations and Mr Trump responded with tweets that disparaged the French president.

For the moment, Mr Macron is the only major European leader Mr Trump can deal with. The US president’s relations with German chancellor Angela Merkel are glacial, and British prime minister Theresa May is to resign as Conservative Party leader on Friday.

Both the US and French leaders highlighted their military co-operation in Africa and the Middle East. Mr Macron balanced criticism of Mr Trump’s isolationism with gratitude to the US. “We know what we owe to you veterans,” the French president said emphatically, in English, to D-Day survivors. “Our freedom. On behalf of my nation, I want to say thank you.”

Mr Trump said relations with Mr Macron had ups and downs but “right now it is outstanding”.