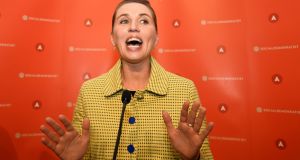 Social Democratic leader Mette Frederiksen: “I will talk to all parties, there are constructive sounds coming also from the conservative camp.” Photograph: Fabian Bimmer

After polls closed, she thanked Danish voters for deciding “that Denmark takes a new political direction . . . for a new government”.

On Thursday, she and other political leaders met Queen Margrethe at Amalienborg Palace for traditional post-election talks, giving the 41 year old the first shot at forming the next government as Denmark’s youngest-ever prime minister.

Her preference is a minority administration seeking out parliamentary partners on a case-by-case basis: centre-left for welfare and spending, centre-right for immigration.

“I will talk to all parties, there are constructive sounds coming also from the conservative camp,” she said on Thursday.

Official results gave her Social Democrats 26 per cent of the vote and 48 of the 179 seats in parliament. A general swing to the left saw Denmark’s centre-left bloc take 91 seats in total. The centre-right block captured 75 seats, with the remaining mandates going to non-aligned parties. Outgoing prime minister Lars Løkke Rasmussen’s Liberals took 23 per cent, or 43 seats and, after four years in power, he submitted his resignation.

The Social Democrats’ hard line on immigration helped halve support for the populist Danish People’s Party, down from over 20 to 8.7 per cent and just 16 seats in parliament.

Politics professor Marlene Wind of the University of Copenhagen said Danes had not rejected right-wing extremism. Instead the “extremist vote is being split between support for the Social Democrats and the far-right front”.

The social democratic hard line on immigration hasn’t happened overnight. In the last parliamentary term the party supported more than 100 measures to tighten asylum laws of the Rasmussen government.

In the campaign, Ms Frederiksen proposed an upper limit on migrants from “non-western” countries, an obligation on refugees to work and, most controversially, camps in Africa to hold asylum seekers while their applications are processed. Other members of Denmark’s centre-left bloc are wary of supporting such policies but have signalled a willingness to engage in talks.

It remains unclear whether the result has helped or harmed the Brussels ambitions of outgoing competition commissioner Margrethe Vestager. Despite her high profile in Brussels and reputation around the continent as an able operator, she is less popular in her native Denmark. As a liberal, she has few Social Democrat friends and Ms Frederiksen has so far remained silent on her backing for Ms Vestager.