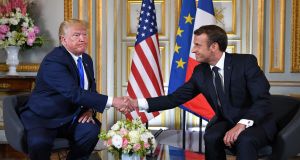 All eyes were on the chemistry between presidents Emmanuel Macron and Donald Trump when the French and American leaders met for commemorations of the 75th anniversary of the D-Day landings in Normandy on Thursday.

Macron made only one obvious criticism of Trump. Present-day leaders “owe it to all those who fought to show ourselves worthy of the heritage of peace”, the French president said.

Macron’s first encounter with Trump, on Bastille Day in 2017, was effusive and affectionate. The French leader reportedly lost all illusions that he could influence the US president during an April 2018 visit to Washington.

Last November 11th, Macron angered Trump by denouncing nationalism and populism at first World War commemorations. Trump retaliated with a volley of tweets mocking Macron’s low approval rating and saying that the French would all speak German if the US had not liberated them.

The chill in Franco-American relations continued. Le Monde newspaper found symbolism in the fact that the oak tree planted by the two presidents on the White House lawn died. Judging from their cordial words and behaviour on Thursday, they have decided to try to get along.

The two leaders mostly avoided politics. Both focused their speeches on the historic importance of D-Day, when 132,700 allied troops landed on five beaches in Normandy to begin the liberation of the continent from Nazi Germany.

From official speeches and interviews given by some of the 170 second World War veterans in attendance, images of astounding heroism emerged, of soldiers plunging into the sea up to their necks, watching comrades cut down by German gunfire in water and on sand turned red with blood.

The power of the stories told by Trump shone through his poor oratory skills. The army medic Ray Lambert was only 23, “but he had already earned three Purple Hearts and two Silver Stars fighting in north Africa and Sicily”, the US president recounted.

Lambert and his brother Bill boarded separate landing craft. “‘If I don’t make it,’ Bill said, ‘please, please take care of my family.’ Ray asked his brother to do the same,” Trump read. “Again and again, Ray ran back into the water. He dragged out one man after another. He was shot through the arm. His leg was ripped open by shrapnel. His back was broken. He nearly drowned.”

When Lambert woke up, his brother Bill was on the cot beside him, also wounded. Both survived, though Bill has since died.

“Ninety-eight-year-old Ray is here today, with his Purple Heart,” Trump said, going to the old man seated behind the podium. “Ray, the free world salutes you.”

Trump then told the story of Private First Class Russell Pickett, who was wounded on Omaha beach, removed to hospital in England and returned to Normandy six days later. By that time, two-thirds of his company had been killed. Pickett was gravely wounded by a grenade, but again returned to combat. The third time he was wounded, Pickett was unconscious for 12 days.

“Believe it or not, he has returned once more to these shores to be with his comrades,” Trump said. “Private Pickett, you honour us all with your presence. Tough guy.” The frail old man struggled to his feet, supporting himself on a cane.

The French president decorated five US veterans, all aged between 94 and 100, with the Legion of Honour.

At some point soon, there will be no more representatives of what has become known as “the greatest generation” to bear witness. Unlike earlier significant anniversaries, Thursday’s commemoration was mostly a Franco-American affair. For the first time, the broader international ceremony had taken place the previous day, in Portsmouth.

In 2004, Jacques Chirac invited German chancellor Gerhard Schröder to the D-Day commemorations, the first time a German leader attended. Five years ago, Vladimir Putin participated in negotiations on Ukraine with US, European and Ukrainian leaders on the sidelines of the ceremony.

Many historians say the war was won in the east, by Soviet Russia, more than by US-led forces to the west. Putin’s absence on Thursday was much commented upon. “Why should they always invite me everywhere?” Putin asked at the Saint Petersburg economic forum. “I am not a general from an operetta. I have enough to do here.”

At a brief press conference in Caen in Normandy, Trump boasted repeatedly of his relationship with Queen Elizabeth.