Stoltenberg makes staunch defence of Nato in address to Congress 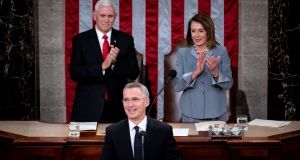 Nato secretary general Jens Stoltenberg launched a passionate defence of the north Atlantic alliance on Wednesday as he addressed Congress on the eve of the 70th anniversary of the organisation.

In a speech to a special sitting of the joint houses of Congress, Mr Stoltenberg warned of a resurgent Russia, pointing to the annexation of Crimea – “the first time in Europe that one country had taken part of another by force since World War Two”.

He also highlighted Russia’s interference in democratic elections, its use of nerve gas in Britain last year and its “massive military build-up from the Arctic to the Mediterranean and from the Black Sea to the Baltic”.

Mr Stoltenberg, who was invited by House speaker Nancy Pelosi to address a special session of Congress, recalled how president Harry Truman had signed the organisation’s founding treaty in Washington in 1949.

Describing America as the “backbone of our alliance”, he said that US involvement “has been fundamental to European security and for our freedom”. “We would not have the peaceful and prosperous Europe we see today without the sacrifice and commitment of the United States, ” he said.

But he also highlighted the benefits Nato membership had conferred on the US. “Through Nato, the United States has more friends and allies than any other power. This has made the United States stronger, safer, and more secure.”

Mr Stoltenberg, whose address was punctuated by bursts of applause and standing ovations by members of Congress, delivered his speech at a difficult time in US-Nato relations.

President Donald Trump threatened to pull out of the military alliance, which was established in the aftermath of the second World War, during his election campaign, and has consistently called on European members such as Germany to contribute more money to the organisation.

Mr Stoltenberg, who had a bilateral meeting with Mr Trump in the Oval Office on Tuesday, highlighted the increased funds pledged by members in recent years in his speech.

“In just the last two years, European allies and Canada have spent an additional $41 billion on defence. By the end of next year, that figure will rise to $100 billion,” he said. “This is making Nato stronger.”

Meanwhile, minutes before Mr Stoltenberg’s address, the House judiciary committee voted to subpoena the Mueller report, setting up a potential constitutional battle that could end up in the courts.

The 24-member committee, chaired by Democrat Jerry Nadler, voted along party lines to use subpoena powers to compel attorney general William Barr to hand over the full report and underlying documents.

Mr Barr submitted a four-page summary of special counsel Robert Mueller’s final report into Russian interference in the 2016 election 10 days ago, but declined to furnish Congress with the full report. He has since indicated that he intends to provide Congress with a redacted version of the report by mid-April.

Mr Nadler indicated that he would not use the subpoena immediately.

“I will give him time to change his mind,” he said in his opening statement. “But if we cannot reach an accommodation, then we will have no choice but to issue subpoenas for these materials.”

Following 22 months of investigations, Mr Mueller completed his report almost two weeks ago. While the former FBI chief concluded there was no collusion between Mr Trump’s circle and Russia in the run-up to the 2016 election, he did not come to a conclusion on obstruction of justice charges, according to Mr Barr’s summary.