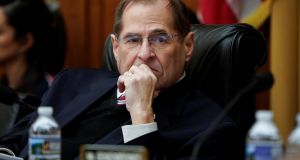 The House judiciary committee will vote on Wednesday to approve a subpoena for Robert Mueller’s final report as Democrats step up the pressure on Donald Trump’s administration to release the full findings of the special counsel’s Russia investigation.

The Democratic-controlled committee will vote to authorise subpoenas for the “full and complete” report, any underlying evidence and documents and testimony from five former Trump administration officials.

“Congress requires the full and complete special counsel report, without redactions, as well as access to the underlying evidence,” said Jerrold Nadler, the Democratic chair of the committee, in a statement on Monday.

The move by Mr Nadler is the latest development in an ongoing struggle between the Trump administration and Democrats in Congress over the findings of Mr Mueller’s almost two-year investigation into links between Russia and Mr Trump’s 2016 campaign.

William Barr, the attorney general, told Congress last month Mr Mueller had not established any co-ordination between the Russian government and the Trump campaign. He also said the special counsel had not come to a conclusion about whether the president had obstructed justice.

On Friday, Mr Barr said in a letter to lawmakers that he would release a redacted version of Mr Mueller’s nearly 400-page report by mid-April. Democrats have demanded its publication by April 2nd.

The end of the special counsel’s investigation without the filing of criminal charges alleging conspiracy with the Russians has been treated as vindication by Mr Trump and his supporters.

It is unclear whether Mr Mueller found little or no evidence of “collusion”, or if he did not find enough to support a criminal case, an outcome that could still prove politically damaging to the president.

“No matter what information is given to the crazed Democrats from the No Collusion Mueller Report, it will never be good enough,” said the president in a tweet on Monday morning.

An attorney for Mr McGahn, Mr Bannon and Mr Priebus declined to comment.

The former officials were among the 81 individuals and entities who received document requests last month from the House judiciary committee, which is investigating alleged obstruction of justice and abuses of power by the Trump administration.

“Regrettably, not everyone has chosen to voluntarily co-operate with the committee at this time,” said Mr Nadler. “I have asked the committee to authorise me to issue subpoenas, if necessary, to compel the production of documents and testimony.”

Separately, Mr Trump is poised to pile more pressure on Nato allies to increase their military spending as the alliance prepares for a 70th birthday event in Washington.

Jens Stoltenberg, Nato’s secretary general, said he expected the US president to push for greater burden-sharing by European allies when the two men meet in the US capital on Tuesday, ahead of the commemoration and a gathering of the organisation’s foreign ministers.

Mr Trump has repeatedly criticised European Nato members for their slow progress on hitting an alliance target to spend 2 per cent of gross domestic product on their armed forces by 2024. Germany – a frequent target of the president’s ire – has recently sought to assuage doubts that it will even reach a lower benchmark of 1.5 per cent of economic output.

“I expect that the message from President Trump will be that the US is committed to Nato, that Nato is important for our shared security – but at the same time we need fair sharing of the burden,” Mr Stoltenberg told reporters in Brussels on Monday before leaving for the US, where he will also address a joint session of Congress. “My message will be: ‘I agree. Nato is a strong alliance – but for Nato to remain a strong alliance we need to be a fair alliance’.”

European diplomats are braced for possible attacks from Mr Trump this week, even though the 70th anniversary is not being marked at leader level – in contrast to the alliance’s 60th and 50th birthdays.