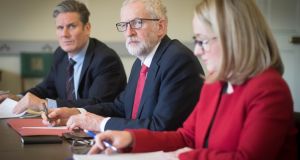 British prime minister Theresa May and the British Labour leader Jeremy Corbyn held a “useful but inconclusive” meeting on the way forward on Brexit on Wednesday.

The talks broke up shortly before 5pm.

Following the meeting Mr Corbyn said that Mrs May has to accept that her Brexit deal is dead and she needs to move in Labour’s direction.

The Labour leader said the meeting was “useful but inconclusive” and “there has not been as much change as I expected” in the prime minister’s position.

Mr Corbyn reiterated his view that another Brexit referendum should be held to prevent either a no-deal Brexit or one with a bad deal, but he said no “red lines in the future” on any potential agreement he might reach with the prime minister were discussed.

His comments came as shadow foreign secretary Emily Thornberry wrote to shadow cabinet colleagues calling for a public vote on any deal.

Mr Corbyn said further talks on the more technical aspects of Brexit were due on Thursday morning.

The meeting followed Mrs May’s dramatic announcement that she was willing to reach out across the political divide to find a deal allowing her to obtain a short delay to Brexit at an emergency EU summit on April 10th.

Mr Heaton-Harris, whose responsibilities had included overseeing no-deal preparations, said the PM was being badly advised over the risks of a no-deal Brexit, and that Mrs May’s evident determination to avoid no-deal had made his job “irrelevant”.

The news came after minister for Wales and government whip Nigel Adams resigned, telling Mrs May she risks “simultaneously failing” to deliver the Brexit people voted for and prevent “the calamity of a Corbyn government”.

On Wednesday evening MPs voted to approve the first stage of legislation which would force Mrs May to seek a delay to Brexit in order to prevent the risk of the UK leaving the EU without a deal on April 12th.

MPs were seeking to pass the Bill from Labour MP Yvette Cooper through all of its stages in the House of Commons on Wednesday.

They voted by 315 to 310 in favour of the first stage. A final vote was due at about midnight.

An earlier vote in the House of Commons on Wednesday on whether to hold further indicative votes on Brexit resulted in a tie of 310-310.

After much contemplation, I have decided to leave Theresa May's Government. I'm grateful to the PM for giving me the opportunity to serve the UK and I will continue to represent my constituents as the MP for Daventry. pic.twitter.com/sHkVhwJ7bb

Speaker John Bercow then used his casting vote, in line with precedent, to vote with the No side – which meant Labour MP Hilary Benn’s amendment on paving the way for a third round of indicative votes on Brexit alternatives was defeated by 311 votes to 310.

As Mr Corbyn met Mrs May for the Brexit talks, leaders and spokesmen of other opposition groups agreed to make a People’s Vote their priority.

“Given everything we now know – and the detrimental impact Brexit will have on the UK’s economy, job opportunities and people’s livelihoods, the priority must be bringing the issue back to the people in a People’s Vote – with the option to remain [in the EU] on the ballot paper.”

Hardline Brexiteers had reacted angrily to Mrs May’s offer to seek a common approach to Brexit with Mr Corbyn.

“You do find that leaders who decide to go with the opposition rather than their own party find their own party doesn’t plainly follow. I’m not sure this is the way to conciliate people to persuade them if they haven’t moved already to move at this stage. I think getting the support of a known Marxist is not likely to instil confidence in Conservatives,” he said.

In a “no-deal” Brexit the EU will expect the UK to honour its responsibilities under the Belfast Agreement and immediately engage with Ireland and the EU to find a solution to the Border issue, a senior EU official said on Wednesday.

Briefing journalists in Brussels about no-deal customs preparations, commissioner for economic affairs Pierre Moscovici insisted that the inevitable customs checks on goods and animals in Ireland in such a scenario would be “away from the Border as much as possible”.

He began his press briefing in Brussels by saying: “We are now faced with an increasing risk of no-deal Brexit on April 12th.”

He said the European Commission is involved in intensive discussions with Ireland on the issue, but “the Good Friday Agreement [Belfast Agreement] must apply in all circumstances”.

The commissioner also said the commission was ready to give technical and financial assistance to Ireland for a no-deal situation.

And he noted that Irish lorries passing through the UK to the rest of the EU would be able to avail of the benefits of the Transit Convention which would allow them to travel sealed and bypass internal customs controls.

Of particular concern, however, to British journalists was the revelation that customs officers would confiscate British sausages as passengers on the Eurostar descended in Brussels and Paris.

As travellers from what was now a “third country” they would face the same prohibition on importing to the EU animal-based products as other third country travellers. That would include pork pies, Scotch eggs, British cheeses, apples and other delicacies, reporters were told.

Such products could still be exported, however, by British companies which satisfy EU health and phytosanitary standards.

Mr Moscovici said that national customs infrastructure and logistics are ready to handle a no-deal scenario.

“We are ready to face this challenge should it come to that. In the area of customs and taxation, a no-deal Brexit would mean the immediate re-establishment of customs controls on goods coming from the UK, new customs forms to fill in for companies trading with the UK and the need to collect VAT on goods imported from the UK.

“Any traders still not aware of what is required should contact their national authorities immediately to ensure that the flow of goods remains as smooth as possible in case of no deal.”

Meanwhile, Tánaiste and Minister for Foreign Affairs Simon Coveney said he believes it is unlikely the UK “will crash out of the EU”, but he is still warning Irish businesses to plan for a no-deal Brexit.

He welcomed the talks between Mrs May and Mr Corbyn.

“We’ve been saying for some time that the way forward is for the two largest parties to work together.

“That doesn’t mean that we should not be preparing for the consequences of a no-deal Brexit. We would not be honest if we didn’t encourage businesses to be ready,” he told RTÉ Radio 1’s Today with Sean O’Rourke show.

Mr Coveney pointed out that 80,000 Irish businesses trade with the UK, but that to date only 46,000 have registered with the Revenue Commissioners for a Custom Number.

When asked about the Government’s contingency plans for the Border in the event of a no-deal Brexit, Mr Coveney said that he cannot give details of “a plan that does not exist yet”.

However, he added: “We have plans for every other contingency.”

He was adamant that there will not be a physical border. “We will act with the European Commission on a plan that won’t have a physical infrastructure, but there will still be a negative impact.”

Mr Coveney said “everyone is trying to find a way through this Brexit challenge”. - Additional reporting Reuters/PA