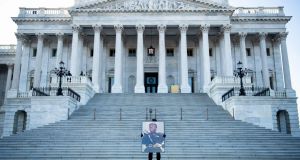 A protester stands outside during the impeachment trial of US president Donald Trump on Capitol Hill in Washington, DC. Photograph: Brendan Smialowski/AFP via Getty Images

US Senate Democrats mounted a last-ditch effort to persuade moderate Republican senators to back calling new witnesses, including John Bolton, in Donald Trump’s impeachment trial, ahead of an expected vote on the issue by the week’s end.

Before the question-and-answer portions of the Senate proceedings resumed on Thursday, Chuck Schumer, the top Democratic senator, said Mr Trump’s impeachment trial would be “rigged” in favour of a speedy acquittal if enough Republican lawmakers did not back new witnesses.

Senators are expected to vote Friday to determine whether to allow testimony from key players in the Ukraine scandal, such as Mr Bolton, who did not testify during the impeachment inquiry in the House of Representatives after the White House told its officials not to co-operate.

The former national security adviser has become a focus of the impeachment proceedings this week after reports that he accuses Mr Trump in a forthcoming book of saying that he was withholding military aid to Ukraine until Kiev complied with a demand to investigate former US vice-president Joe Biden. This claim directly links to the president to a central allegation in the impeachment case.

“It is certainly in [Republican] interests, and the president’s interest, to have a fair trial,” Mr Schumer said. “A trial without truth, without key evidence, without witnesses and documents, would render the president’s acquittal meaningless, [with] a giant asterisk right next to it, because the trial was so rigged in his favour.”

If the Senate decides to quash the possibility of new witnesses, Mr Trump could potentially be acquitted by the upper chamber as early as Friday, allowing him to claim victory just days before next week’s Iowa caucuses, which launch the 2020 presidential election campaign, and his State of the Union address to Congress.

Although some centrist Republicans – such as Mitt Romney of Utah, Susan Collins of Maine, and Lisa Murkowski of Alaska – have suggested they might back new witnesses, one more senator from Mr Trump’s own party would need to vote in favour of additional testimony to get a majority.

Republican leaders have argued against calling new witnesses, saying the case against Mr Trump is deeply flawed and that the House impeachment hearings late last year provided an adequate amount of testimony.

One Republican senator seen as a possible vote for witnesses, Cory Gardner of Colorado, said on Wednesday that he thought the Senate had heard enough testimony.

After saying earlier this week that the outcome was uncertain, Mitch McConnell, the Republican Senate majority leader, has now told colleagues that his party has enough votes to block new witnesses, according to ABC News. A spokesman for Mr McConnell did not immediately return a request for comment.

Mr Trump was charged with abusing his power and obstructing Congress in the Ukraine scandal. He is accused of withholding military aid to the country in order to persuade Kiev to launch an investigation into Mr Biden, the former vice-president and a potential rival for re-election in November, and his son Hunter, who held a lucrative board seat at Ukrainian gas company Burisma.

In a moment of drama at the beginning of Thursday’s session, John Roberts, the chief justice of the supreme court, who is presiding over the trial, refused to read out a question submitted by Rand Paul, the Kentucky Republican, because it named the whistleblower whose complaint sparked the impeachment inquiry.

“The presiding officer declines to read the question as submitted,” Mr Roberts said. Mr Paul then left the Senate floor and tweeted: “My question today is about whether or not individuals who were holdovers from the Obama National Security Council and Democrat partisans conspired with [Adam] Schiff staffers to plot impeaching the President before there were formal House impeachment proceedings.”

During the first day of the question-and-answer session in the Senate trial on Wednesday, Alan Dershowitz, a lawyer representing Mr Trump, made the case that the US president should benefit from a very broad interpretation of executive power, to the point that he should not be impeached for actions taking to support his re-election if he believed it was in the public interest.

On Thursday morning Mr Dershowitz partially walked back his comments.

“I did not say or imply that a candidate could do anything to reassure his re-election, only that seeking help in an election is not necessarily corrupt, citing the Lincoln and Obama examples,” Mr Dershowitz wrote on Twitter. “Critics have an obligation to respond to what I said, not to create straw men to attack.” – Copyright The Financial Times Limited 2020