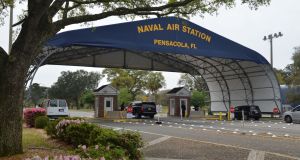 A Saudi air force trainee opened fire at a Naval Air Station in Florida on Friday, killing three people, immediately prompting questions about security at the Pensacola station military base.

US president Donald Trump said on Twitter that King Salman of Saudi Arabia had called to express his “sincere condolences and give his sympathies to the families and friends of the warriors who were killed and wounded in the attack”.

He said the king had told him the Saudi people were “greatly angered by the barbaric actions of the shooter, and that this person in no way shape or form represents the feelings of the Saudi people who love the American people”.

Friday’s attack, which unfolded in a classroom and left eight other people injured, was the second to occur at the site this week after a US sailor shot dead two workers at the base on Wednesday.

Speaking to journalists at a White House event, the president declined to comment on a possible motive for the attack. “It’s a horrible thing that took place and we’re getting to the bottom of it,” he said. “That’s all being studied now,” he said, when asked if it was being treated as a terrorist incident.

The US is a close ally of Saudi Arabia in the Middle East, despite last year’s killing of journalist Jamal Khashoggi in the Saudi consulate in Istanbul.

But Florida governor Ron DeSantis said the incident at the Pensacola base had raised questions.

“There’s obviously going to be a lot of questions about this individual being a foreign national, being a part of the Saudi air force and then to be here training on our soil,” he said. “The government of Saudi Arabia needs to make things better for these victims.”

The military base employs more than 16,000 members of the military and 7,400 civilians.

Local Republican congressman Matt Gaetz also suggested that terrorism could be a motive.

Mr Trump was speaking as new figures from the labour department showed a strengthening US economy – a boost for the US president as he faces a deepening impeachment inquiry.

Figures from the department on Friday showed the US economy added 266,000 jobs last month, with the unemployment rate falling to 3.5 per cent. While some of the jump in employment reflected the return to work of thousands of General Motor workers following the end of a strike, the numbers beat analysts’ expectations and pointed to a buoyant labour market. “GREAT JOBS REPORT!” the president tweeted, arguing that the stock markets and economy would be “even better” without the “Radical Left, Do Nothing Democrats.”

Several Republicans seized on the data on Friday, calling on Democrats to focus on the positive economic story rather than the impeachment inquiry. The US economy is “on a roll” thanks to Mr Trump, Republican Steve Scalise said, claiming the numbers “could be even better if Dems would give up their partisan impeachment obsession & pass” trade legislation with Canada and Mexico.

On Thursday, House Speaker Nancy Pelosi announced that articles of impeachment would be drawn up against the president, making it highly likely Mr Trump will face an impeachment vote before Christmas.

The House Judiciary Committee will hold its second public hearing on Monday when it will hear evidence from investigators about Mr Trump’s behaviour in Ukraine. As the impeachment process heats up, 500 legal experts wrote an open letter asserting Mr Trump committed impeachable conduct in his dealings with Ukraine. The letter, published by the advocacy group Protect Democracy, states “there is overwhelming evidence that President Trump betrayed his oath of office by seeking to use presidential power to pressure a foreign government to help him distort an American election, for his personal and political benefit, at the direct expense of national security interests as determined by Congress”.

It adds: “His conduct is precisely the type of threat to our democracy that the Founders feared when they included the remedy of impeachment in the constitution.”