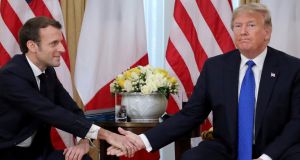 Emmanuel Macron has confronted his Turkish counterpart, Recep Tayyip Erdogan, with his most direct warning yet that Ankara’s recent behaviour is not compatible with its Nato membership.

The French president said it was not acceptable for Turkey to threaten to block all the planned declarations at Wednesday’s Nato leaders meeting in London unless the rest of Nato agreed that Kurdish Syrian forces fighting Islamic State were terrorists.

Speaking alongside Donald Trump and before a meeting between Britain, France, Germany and Turkey in Downing Street, Mr Macron also criticised Turkey for fighting alongside Islamic State proxies in Syria and for trying to use a Russian defence system that was incompatible with Nato technology.

Mr Macron recently described Nato as brain dead after Turkey did not co-ordinate with any Nato partner apart from the US before sending troops into northern Syria in a bid to set up what it describes as safe zones freed of Syrian Kurd YPD fighters.

“I am sorry we do not have the same definition of terrorism around the table,” he said. “When I look at Turkey they are now fighting against those who fought with us shoulder to shoulder. And sometimes they work with Isis proxies.”

He added: “I understand they now want to block all the declarations of this summit unless we agree their definition of terrorism. It is not our definition.”

The French president asked how it was possible to be a member of the Nato alliance and for Turkey to purchase the Russian S-400 air defence system. “Technically it is not possible,” he said.

Mr Macron, in common with most Nato states’ leaders, maintains that a Russian defence system inside Nato will expose its military hardware, including the F-35 fighter jets, to Russian military intelligence.

Pressed by a reporter about whether the US was going to sanction Turkey for buying the S-400 as the US Congress is demanding, Mr Trump said he was looking at the issue.

He then claimed, incorrectly, that Turkey had been forced into looking at the S-400 because Barack Obama had refused to let Turkey buy the US patriot defence system. “Turkey for a long period of time wanted very much to buy the Patriot system,” Trump said. Obama, he said, “wouldn’t sell” it.

In fact the Obama administration offered the weapon to Turkey repeatedly but Mr Erdogan refused because the US deal didn’t include the Patriot’s underlying technology.

After Trump’s defence of the Turkish position, Mr Macron interjected. “It’s their own decision,” he said of Turkey, adding that Europe had also offered to sell Mr Erdogan an air-defence system. “Even having a European option, totally compliant with Nato, they decided not to be compliant with Nato.”

Mr Trump then asked Macron whether he would take any of the foreign fighters that America had captured in Syria and Iraq. Mr Trump said “We have a tremendous amount of captured fighters in Syria under lock and key, mainly from Europe. Would you like some nice Isis fighters? I could give them to you. You can take everyone you want.”

When Mr Macron replied in a generality about the future status of Islamic State terrorists, Mr Trump said: “That is why he is such a great politician. That is one of the greatest non-answers I have heard and that’s okay.”

As the tense exchanges continued Mr Macron said: “Let’s be serious. It is true you have fighters coming from Europe. But it’s a minority problem of the overall problem we have. And I think the number one priority because it is not yet finished is to get rid of Isis.”

Mr Macron has argued ever since the Turkish invasion of north-east Syria in October that the move was a disastrous distraction from the continuing priority of defeating Islamic State. He was also furious that the US started to withdraw all its remaining 500 troops from the area, effectively handing over air bases to Russia.

In an attempt to show his solidarity with the Syrian Kurds, Mr Macron has also hosted political leaders of the Syrian YPD in Paris praising them for the sacrifices they had made to defeat Isis.

Although Mr Trump frequently praises Mr Erdogan, other members of the administration are more criticial. The US defence secretary, Mark Esper, in an interview with Reuters agreed with Mr Macron that Nato cannot label the YPD as a terrorist group. He said: “The message to Turkey ... is we need to move forward on these response plans and it can’t be held up by their own particular concerns,” Mr Esper said as he flew to London.