Democratic leadership of key committees has still not been agreed

US Senate Majority Leader Chuck Schumer has informed his colleagues that House Speaker Nancy Pelosi will send over the article of impeachment against former President Donald Trump on Monday. 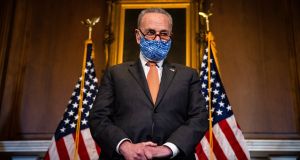 With both parties now controlling 50 seats, Democrats have a narrow majority hinging on Ms Harris’s ability to cast a tie-break vote if needed.

Mr Schumer is still working out organisational details of how Senate business will run with minority leader Mitch McConnell, with the result that Democratic leadership of key committees has still not been agreed.

Mr McConnell is seeking a written commitment by Democrats that they will not change the filibuster – a complex procedural rule which effectively ensures that a 60-40 majority is needed to pass some legislation.

Mr Schumer, who has served as the senator from New York since 1998, called for bipartisanship as he was officially sworn in as the de facto leader of the Senate, stating that “the Senate works best when we work together”.

One of the chamber’s immediate tasks will be to schedule former president Donald Trump’s impeachment trial. House speaker Nancy Pelosi is expected to send the article of impeachment to the Senate in the coming days, though the scope of the trial has not been decided.

According to some reports, one possibility is a lightning-quick trial of three days, but Ms Pelosi refused to be drawn on details of the discussions at a press conference on Thursday.

Asked if an impeachment trial was at odds with Mr Biden’s message of unity at his inauguration, Mr Pelosi replied: “No . . . the fact is, the president of the United States committed an act of incitement of insurrection. I don’t think it’s very unifying to say, ‘oh, let’s just forget it and move on’. That’s not how you unify.”

Equally pressing are confirmation hearings for the President’s cabinet nominees. Only one nominee – Avril Haines, the new director of national intelligence – was approved before Mr Biden took office, a historically low number. The first female head of the intelligence services, she was sworn in at the White House on Thursday.

Pete Buttigieg, Mr Biden’s nominee for transportation secretary, appeared before the Senate commerce committee on Thursday. The 39-year-old former mayor of South Bend, Indiana and presidential candidate, advocated for what he called “a generational opportunity to transform and improve America’s infrastructure”.

While senior cabinet nominees such as Janet Yellen, Mr Biden’s pick for treasury secretary, and Antony Blinken, his choice for secretary of state, participated in confirmation hearings earlier this week, a vote has yet to be scheduled on their appointments.

The two Houses of Congress on Thursday approved a waiver for Lloyd Austin, the former general nominated by Mr Biden to lead the Pentagon. Mr Austin needs an exemption from a rule prohibiting any former military officer from serving as defence secretary for seven years after they leave active-duty service.

With the House and Senate approving the waiver, a confirmation hearing will take place in the Senate.