Growing pressure for ban on non-essential travel within EU 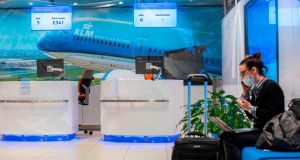 A woman speaks on the phone at the KLM check-in desk at Schiphol Airport, the Netherlands. Photograph: Evert Elzinga/ANP/AFP via Getty Images

There is mounting pressure for a ban on non-essential travel between European Union member states as health authorities warned governments to prepare for a surge in deaths and hospitalisations due to new more infectious Covid-19 variants.

EU national leaders met over video conference on Thursday in a bid to co-ordinate on the issue, amid growing calls from member states for stricter travel curbs within the bloc to avoid travel contributing to the risk that the number of sick people will overwhelm hospitals before vaccines are widely rolled out.

As German chancellor Angela Merkel warned that border controls between member states are a possibility if stricter joint rules are not agreed, Belgian prime minister Alexander De Croo made an appeal for an EU-wide ban on casual travel.

“We must put a stop to tourist and leisure travel,” he said. “When you travel, you often bring the virus with you in your suitcase, and we need to be able to at least temporarily shut that down.”

Borders should not be shut completely as it is essential for trade to continue and for cross-border workers to be able to commute, but tourism should be out of the question, De Croo explained.

A string of member states indicated their support for tougher curbs on travel ahead of the online summit, though the issue is sensitive for states that rely on tourism as a large part of their economy.

There are growing concerns that Europe’s traditional mid-February holiday should not be allowed to be a repeat of last year, when skiers caught Covid-19 in Alpine resorts and spread it back to their home countries all over the continent, contributing to the pandemic’s first wave.

The Irish Government will support joint measures to “limit international travel where necessary” as long as supply chains between EU states remain open, according to a Government source.

Ireland’s stark surge in infections is a focus of attention across the EU, where it has caused deep concern over the potential of the new British Covid-19 variant. Taoiseach Micheál Martin was called on to brief fellow leaders on Ireland’s experience and what had led to the spike.

The European Centre for Disease Prevention and Control raised the risk of new variants from high to very high on Thursday, and warned that the greater infectiousness of the British variant was likely to lead to “higher hospitalisation and death rates across all age-groups”.

It warned member states to prepare their hospitals for a surge in demand, and urged them to maintain testing and quarantine requirements for travellers, particularly those coming from regions where the new variants are more widespread.

Governments should be prepared to introduce even stricter curbs than those currently in place to bring down the spread of the virus, it warned, and non-essential travel should be avoided.

Ireland is currently ranked highest in the EU for its rates of Covid-19 in the ECDC’s 14-day incidence chart and has the highest prevalence of the British variant in the bloc, meaning that there are concerns about travel from the Republic in particular.