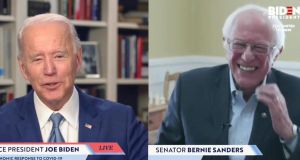 Senator Bernie Sanders endorsed Joe Biden as the Democratic nominee for president on Monday, adding the weight of his left-wing support to Biden’s candidacy and taking a major step toward bringing unity to the party’s effort to unseat President Donald Trump in November’s US election.

The decision by Sanders to back his former rival is an unmistakable signal to his supporters – who are known for their intense loyalty – that they should do so as well, at a moment when Biden still faces deep scepticism from many younger progressive voters.

In a surprise joint appearance over livestreamed video, the two men revealed a rapprochement forged amid extraordinary circumstances just five days after Sanders withdrew, a sign of how profoundly the coronavirus pandemic has changed the race.

The uncertainty caused by the virus, the vast damage to the US economy and the fervent desire to deprive Trump of a second term prompted an earlier-than-expected alliance between two ideological rivals, aimed at bringing together disparate factions of the party.

“We need you in the White House, ” Sanders said to Biden. “And I will do all that I can to see that that happens.”

Biden said: “I’m going to need you. Not just to win the campaign, but to govern.”

The coalescence behind Biden will gain even more strength with the backing of senator Elizabeth Warren, who is expected to endorse him soon, according to people familiar with the matter. There is not any hold-up or demand for concessions for her support, these people said. Warren is the only major former rival yet to endorse the former vice-president, though only because she has left the timing of an announcement up to Biden’s team.

The challenge now for Biden and Sanders is to create an agenda that sticks to Biden’s relatively moderate policy views and draws in progressives but also seems big enough to match the moment in the country.

It is a complicated task for both of them: Biden, who easily won the Wisconsin primary in results announced on Monday evening, will have to convince more Sanders-supporting liberals that he will fight for their interests. Sanders is essentially committing himself to vouching for Biden or at least bringing more of his followers into the Biden camp. Neither man can predict with any assurance how their political alliance will pan out.

Already, progressive groups and activists were expressing scepticism about how far Biden would go to incorporate Sanders’ followers. “Winning over Senator Sanders is one thing, but Joe Biden shouldn’t think that the work is over,” said Evan Weber, political director for the Sunrise Movement, an organisation of young climate activists that had endorsed Sanders. He added, “There is still work to do to win over progressive leaders and young people.”

In moving so quickly to embrace more of the policy ideas and political language of Sanders and the left, Biden is providing the clearest sign yet that the virus has changed the political equation and the rhythms of the election season. He also has indicated an intention to expand beyond his primary campaign message of restoring the nation and Washington to a pre-Trump era.

To Bernie’s supporters: I see you, I hear you, and I understand the urgency of what it is we have to get done in this country.

I hope you will join us. You are more than welcome on this campaign. You’re needed. https://t.co/vJXlroCdDd

Progressives have been scathingly critical of that argument, saying that it neglects the many inequities in the economic, healthcare and immigration systems and in other areas where lower-income people struggled in the Obama era and under past presidents.

But at a moment of a presidential campaign when candidates often move to the centre, this expanded message could prove perilous if progressives push Biden to make policy concessions and changes that start to concern more moderate Democrats and independent voters who do not support some planks of a far-reaching liberal agenda.

The alliance announced on Monday was a sharp departure from the drawn-out, often-acrimonious process of reconciliation between Sanders and Hillary Clinton in the 2016 presidential race. And it makes good on the promise Sanders has been making for months: that he would support the eventual Democratic nominee and do everything he could to defeat Trump, whom he has called “the most dangerous president” in modern times.

Former senator Christopher J Dodd, a prominent Biden supporter, said the quick co-operation was a reflection of the friendly personal relationship the two men enjoyed. Sanders was said to be greatly appreciative that Biden did not try to rush him out of the race.

“A lot of people think it’s old-fashioned, being polite to people, listening to people, paying attention to them,” he said. “It’s still important to people. Personal relationships mean a lot.”

Behind the scenes, Biden advisers and allies are already reaching out to former members of the Sanders campaign, according to three people familiar with the discussions, and hope to eventually bring some on board.

That news of the endorsement did not leak beforehand was another signal of the growing unity between the campaigns. Only a small group of people on each campaign knew it was happening, according to a person familiar with the discussions.

Warren and Biden have spoken multiple times since her exit about policy issues, including the plan that Biden has developed to respond to the pandemic. At the staff level, Warren’s chief campaign strategist, Joe Rospars, and Anita Dunn, a senior adviser to Biden, have been engaged in talks bridging the two camps.

Dunn, along with Ron Klain, another long-time Biden adviser, played a central role in negotiations with the Sanders camp in recent weeks, while a top Sanders political adviser, Jeff Weaver, and campaign manager Faiz Shakir represented the Vermont senator.

The scene on Monday was a striking example of the ways coronavirus has upended traditional campaigning. In normal times, both men most likely would have appeared onstage together at a rally – or at least done so at an event with more pomp. Instead, they appeared at their homes, as they have been doing for weeks.

When Sanders officially declared his endorsement, Biden seemed visibly moved. “Oh!” Biden said, before dropping his head as if he hardly saw it coming.

The two men said they would form “task forces” on issues including the economy, education, immigration, healthcare, criminal justice and climate change. Biden’s campaign said that the groups would include “policy experts and leaders that represent the diverse viewpoints of the Democratic Party” and promised updates on the groups’ progress.

Two senior Biden advisers, Cristóbal Alex and Symone D Sanders, who both have relationships in the progressive sphere, have been reaching out to leading liberal organisations, including groups that focus on immigrants’ rights and on climate. And Cedric Richmond, Biden’s campaign co-chairman, has spoken with his counterpart on the Sanders campaign, Ro Khanna, about the need to unite the party.

Still, Sanders’s endorsement surprised many of the progressive grassroots groups that had endorsed his candidacy and that are struggling with the prospect of the more moderate Biden becoming the nominee. Some worried that it undercut the leverage Sanders might have to persuade Biden to make policy concessions.

“We want those task forces to be given real power in the campaign and in the party apparatus,” Weber, of the Sunrise Movement, said. “Not just gestures but real commitments.”

It is unclear how much sway Sanders would have over Biden’s campaign decisions, including his potential cabinet or vice-presidential selections. In a Friday interview with PBS NewsHour, Sanders acknowledged a preference for Biden to pick a more progressive running mate but said he had not weighed in on the choice.

“Joe is going to have to make that decision himself,” Sanders said.

Throughout the campaign, Sanders had often referred to Biden as his “friend”, and the two men have a personal relationship that has remained intact. Even as the field dwindled, Sanders was reluctant to attack Biden directly and largely did so only for a brief spell near the end of his campaign that included the last debate – and only on policy.

That comity was on display on Monday in an appearance that at times resembled a slapdash buddy skit, with levity that offered a brief respite from the seriousness of a national health crisis. The two men seemed to delight in talking to each other – bantering away on subjects that generally sounded as if they had been cleared with campaign aides.

“Do you have any questions for me, Bernie?” Biden said. “I did, Joe,” he said. Both gushed their effusive praise. Near the end, when Biden asked Sanders if there was anything else he wanted to do, Sanders quipped that they should “play some chess”.

“I’d like to play chess!” Biden said. But Sanders was out of moves. As Biden’s livestream drew to a close, a message popped up on his one-time rival’s video screen: “You are muted by host.” – New York Times