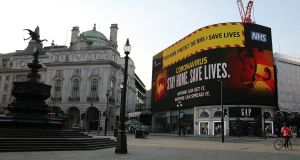 The UK government’s advice to combat the coronavirus epidemic is displayed on the advertising boards at Piccadilly Circus in central London. Photograph: Isabel Infantes/AFP via Getty Images

A further 778 people have died with coronavirus in hospitals in the UK, the health ministry said on Tuesday.

A total of 12,107 patients have died after testing positive for the virus, also known as Covid-19, in the UK as of 5pm on Monday, the Department of Health said.

The Public Health Agency confirmed the deaths of 10 more people in Northern Ireland.

The latest figures from the department follow debate over how best to track the toll of the virus.

Broader data that include fatalities in nursing homes and the wider community suggest the country’s death toll could be 15 per cent higher than the official figures have indicated.

The Office for National Statistics (ONS) said on Tuesday that 5,979 people in England had died by April 3rd with Covid-19, the respiratory disease caused by the virus, mentioned in their death certificates.

“This is 15 per cent higher than the NHS numbers as they include all mentions of Covid-19 on the death certificate, including suspected Covid-19, as well as deaths in the community,” ONS statistician Nick Stripe said.

Even before the ONS figures, the official British death toll was the fifth-highest globally and a senior scientific adviser to the government has said the country risks becoming the worst-hit in Europe.

The numbers, which reflect both deaths caused by primarily by Covid-19 and where it was mentioned as a factor, show just how limited British official data has been so far. Daily figures published by the health ministry record only Covid-19 deaths recorded in hospitals.

Previous data from the National Health Service (NHS) that only covered deaths in English hospitals showed 5,186 people had died during the period to April 3rd.

Including Wales, some 6,235 people had died by April 3rd, the ONS said.

Separate data from Scotland last week showed 354 deaths involved Covid-19 as of April 5th. In Northern Ireland, the toll stood at 79 as of April 3rd.

London was hit particularly hard in the week to April 3rd: nearly half (46.6 per cent) of deaths in the capital involved Covid-19, the ONS said.

Across England and Wales, deaths mentioning Covid-19 accounted for 21.2 per cent of all deaths, compared with 4.8 per cent in the previous week.

Amid concern over deaths in care homes, Scottish first minister Nicola Sturgeon said on Tuesday the Scottish government was is working with the Care Inspectorate to take action.

“I want to give a very strong assurance firstly, that we’re working hard with the Care Inspectorate to provide appropriate support to care homes, their staff and their residents,” she said. “Secondly, we’re working hard to ensure that we can publish full and robust information about numbers of cases in care homes, which we hope to do later this week.”

British government scientists have said the United Kingdom will do well if it manages to keep the coronavirus death toll below 20,000. – Agencies