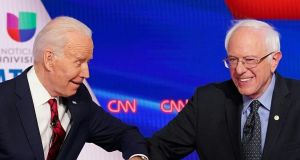 Democratic presidential candidate Joe Biden with his former competitor Bernie Sanders before the start of a debate in Washington, DC. Photograph: Mandel Ngan/AFP via Getty Images

Mr Sanders (78), the senator from Vermont, announced his endorsement on Monday in a live streamed statement with Mr Biden (77), who is now the Democratic party’s presumptive presidential nominee to take on Donald Trump in November.

“Today I am asking all Americans, I am asking every Democrat, I am asking every independent, I am asking a lot of Republicans, to come together in this campaign to support your candidacy, which I endorse, to make certain that we defeat somebody who I believe . . . is the most dangerous president in the modern history of this country,” Mr Sanders told Mr Biden.

“We have got to make Trump a one-term president and we need you in the White House,” the senator added. “I will do all I can to see that that happens.”

Mr Sanders, an independent and self-described Democratic socialist, ended his own presidential campaign last week, saying he had no “feasible path” to the Democratic nomination. He initially stopped short of endorsing Mr Biden, saying he would stay on the ballot in remaining primary states to amass “as many delegates as possible at the Democratic convention” to “exert significant influence over the party platform”.

Mr Sanders ran a progressive primary campaign centred on “Medicare for All”, which would have effectively eliminated private health insurance in the US. His loyal base of supporters, many of whom are younger, spent much of the primary season at odds with more centrist Democratic candidates, including Mr Biden and Pete Buttigieg, the former mayor of South Bend, Indiana.

In 2016, Mr Sanders waited until July, just before the Democratic National Convention, to formally endorse Hillary Clinton for the presidency, a move that many Clinton backers said hurt the former secretary of state in her campaign against Mr Trump.

Around a quarter of Mr Sanders’s 2016 primary supporters did not vote for Mrs Clinton in the general election – instead either voting for Mr Trump or a third-party candidate, or not voting at all, according to the Cooperative Congressional Election Study, a YouGov survey of 50,000 US voters.

More recent polling from Morning Consult suggested at least four in five of Mr Sanders’s 2020 primary supporters would back Mr Biden in November. The Morning Consult poll, conducted after Mr Sanders suspended his campaign last week, found 80 per cent of the Vermont senator’s supporters would vote for the former vice-president in a head-to-head match up against Mr Trump, compared to 7 per cent who said they would back the incumbent.