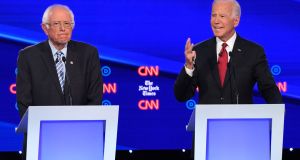 The news that Bernie Sanders is suspending his campaign for the Democratic nomination for US president is not altogether surprising.

Since late February, when Joe Biden won a decisive victory in South Carolina, followed by a string of wins on Super Tuesday and a week later on March 10th, the former vice-president has established an almost insurmountable lead over his rival.

Nonetheless, 78-year-old Sanders had stayed in the race, buoyed by supporters, some of whom felt that his candidacy would help other left-wing candidates running against establishment Democratic names in congressional elections in November.

On Wednesday, Sanders said he had not taken lightly the decision to withdraw from the race, but had consulted with his family, staff and prominent supporters about his prospects for victory.

“If I believed we had a feasible path to the nomination I would certainly continue the campaign. But it’s not there,” he said.

Sanders’s withdrawal at this point in the contest may help avoid the acrimonious scenes that unfolded at the Democratic National Convention in Philadelphia four years ago when supporters of the Vermont senator accused the Democratic establishment of unfairly backing Hillary Clinton, following revelations from hacked party emails.

The reasons for Sanders’s withdrawal now are different than four years ago – Clinton’s lead was not as commanding as Biden’s at this point in the primary calendar, while the coronavirus crisis has changed the pace and timetable of the primary campaign.

For example, concerns that Sanders was unlikely to win Tuesday’s primary in Wisconsin, which took place despite the coronavirus lockdown, may have weighed on his decision to drop out given that he won the state decisively against Clinton in 2016.

Further, Sanders appears to have a much better personal relationship with Biden than he did with Clinton. In the early Democratic debates last year when Biden was far from the frontrunner he is now, both men interjected to back each other at several points. Their most recent debate, which took place in an empty television studio as the coronavirus crisis deepened, was also relatively cordial. It is understood that contacts between the Biden and Sanders campaigns took place in recent days ahead of Wednesday’s announcement.

But Sanders will not go quietly. While he referred to Biden as the presumptive nominee – without explicitly endorsing him – he will continue to make his mark on the political process in the coming months.

Significantly, he will stay on the ballot in states yet to hold primaries, and will continue to gather delegates in proportion to his performance.

Those delegates will then represent Sanders at the Democratic National Convention, which has been postponed until August instead of July, because of coronavirus. Sanders was clear yesterday about why he is adopting this approach.  “We should still work to assemble as many delegates as possible at the Democratic convention where we will be able to exert significant influence over the party platform and other functions,” he said.

Sanders also made a persuasive argument about why the Democratic establishment cannot ignore his campaign, as the party seeks to defeat Donald Trump in November’s presidential election.

“The future of our country rests with young people,” he said on Wednesday, adding that he was winning the generational battle.

He is correct. While Biden’s centrist policy may have won over broad swathes of Democratic voters including African-Americans and suburban women, he underperformed when it came to the youth vote. Biden was quick to reach out to those voters on Wednesday, though similar outreach attempts by Hillary Clinton in 2016 fell flat.

“I know that I need to earn your votes. And I know that might take time,” he tweeted. He also pledged to address the climate crisis, make college “affordable” and “make health care available to all”, taking a leaf from the Sanders playbook.

There is even more of a reason this time around that Sanders’s platform should not be ignored.

As the United States faces the threat of coronavirus and enormous economic costs, some of the policy ideas proposed by Sanders seem more needed than ever, as the impact of the pandemic begins to be felt among lower-income Americans. With Congress already considering a follow-up package to the $2.2 trillion deal agreed last month, the reality is that the US may need further government intervention as coronavirus continues to take its toll.