Riots and the US Capitol overrun: the day that shook America 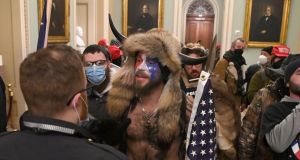 Supporters of US president Donald Trump enter the US Capitol on Wednesday. Photograph: Saul Loeb/AFP via Getty Images

7am: Gates open at the “Save America” rally at the “ellipse” in front of the White House, stretching towards the Washington Monument on the National Mall. Major road closures have been in place from the previous day when the first demonstrators began arriving in the city.

9am: Thousands of Trump supporters have already gathered on the Mall, ahead of Donald Trump’s speech. Carrie McPherson, a manager in a dental office, says she made the trip from Richmond, Virginia for the event.

“I’m here because America is in disarray,” she tells The Irish Times. “We have won the election. It is quite clear that a lot went on with this election that is just not right. The Democrats are trying to steal the election, we’re not going to let it happen, come hell or high water. Donald Trump has done everything for the American people for the last four years – he’s getting four more years.”

10am: Donald Trump’s sons Eric and Donald Trump jnr warm up the crowd, followed by former New York mayor Rudy Giuliani. Donald jnr throws down the gauntlet to Republicans preparing to gather on Capitol Hill later in the day to certify the election results. “To those Republicans, many of which may be voting on things in the coming hours: You have an opportunity today. You can be a hero, or you can be a zero. And the choice is yours. But we are all watching. The whole world is watching, folks. Choose wisely.”

12 noon: The president makes the short journey from the White House to the make-shift stage, an hour later that advertised. He speaks for 75 minutes, reprising his unsubstantiated claims about election fraud, and criticising “weak Republicans”. “If Mike Pence does the right thing, we will win the election,” he declares.

12.50pm: Pence issues a statement minutes before he attends the joint session of Congress, stating that he will not object to the election result after “a careful study of the constitution”.

“Our Founders were deeply skeptical of concentrations of power and created a Republic based on separation of powers and checks and balances,” he writes. “Vesting the VP with unilateral authority to decide presidential contests would be entirely antithetical to that design.”

1pm: The joint session of Congress to count the electoral college votes from each state and declare Joe Biden the winner of the election begins. Pence, in his capacity as president of the Senate, takes to the floor beside Nancy Pelosi as the session begins. As the tellers read out the results from each state, a House member announces an objection to the results from Arizona, seconded by a member of the senate, Ted Cruz.

1.30pm: As set out in the rules, the two houses split, senators return to the chamber, and both houses begin debating the objection to the state of Arizona. The rules limit debate to two hours. Senate majority leader Mitch McConnell urges his fellow Republicans to accept the result. “The voters, the courts and the states have all spoken. If we overrule them, it would damage our republic forever,” he says.

1.50pm: Senator Ted Cruz defends his decision to challenge the result, arguing that 39 per cent of Americans believe the election was rigged. “It is a reality for half the country,” he says.

2pm: Protesters who have moved from the Save America rally a mile west of the US Capitol are now beginning to breach the barricades around the building at the foot of Capitol Hill near where the inauguration stand for Biden’s swearing-in ceremony has been erected.

2.20pm: House and Senate suspend proceedings and staffers in neighbouring buildings in the wider complex are told to shelter in place.

2.45-5pm: The Capitol is put in lockdown. Thousands of Trump supporters enter the building, smashing windows and ransacking offices. Tear-gas is deployed in the rotunda. Members of the House are told to lie on the ground and put on gas masks as security personnel draw weapons, trying to stop rioters entering the chamber. They later enter through the second and third floor galleries, after members have been evacuated.

4pm: President-elect Joe Biden delivers a speech from Delaware, denouncing the “assault on the citadel of liberty, the Capitol itself”. He demands that Donald Trump address the nation in a televised address “to fulfil his oath and defend the constitution and demand an end to this siege”.

4.15pm: Trump releases a video asking his supporters to go home, but repeating his allegations of election fraud. Twitter later removes the tweet and bans the president from the platform for 12 hours.

5.45pm: Officials announce that the Capitol building is secured, after police from the neighbouring states of Maryland and Virginia and DC’s entire national guard were mobilised, along with the FBI and other law enforcement officials.

6pm: Washington DC curfew begins. Hundreds of Trump supporters remain outside on the west side of the Capitol, defying the city-wide order while a row of heavily armed law enforcement officers protects the Capitol complex. The crowd finally disperses, and some arrests for curfew-violation are made.

7.50pm: Former president Barack Obama issues a statement, accusing the sitting president of inciting the violence at the Capitol. He calls it “a moment of great dishonour and shame for our nation”.

8pm: Members of Congress return to the two chambers, with the Senate resuming debate on the Arizona objection, and the House convening an hour later. “The United States Senate will not be intimated,” said Senate majority leader Mitch McConnell. “We will not be kept out of this chamber by thugs, mobs or threats. We will not bow to lawlessness or intimidation . . . We will certify the winner of the 2020 presidential election.”

11pm: Both chambers finish debating and vote on the Arizona objection and reconvene in joint session. As expected, the objection is rejected. Though fewer senators objected than had been expected, 121 Republicans in the House still vote to reject Arizona’s results.

12.15am: An objection is raised to the results from Pennsylvania – chambers once again split, though only the House holds a lengthy debate.

12.30am: Authorities confirm that four people have died in connection with the riots. One woman was fatally shot by a Capitol police officer; three others died from unspecific “medical emergencies”.

3.15am: After debate in the House, a joint session dismisses the objection to Pennsylvania’s results, though seven Republican senators and 138 Republican House Republicans vote to throw out the state’s electoral college vote.

3.49am: Donald Trump issues a statement through his aide Dan Scavino because his own Twitter account has been suspended: “Even though I totally disagree with the outcome of the election, and the facts bear me out, nevertheless there will be an orderly transition on January 20th. I have always said we would continue our fight to ensure that only legal votes were counted. While this represents the end of the greatest first term in presidential history, it’s only the beginning of our fight to Make America Great Again!”

6am: Washington DC’s overnight curfew lifted, but DC’s mayor Muriel Bowser extends the public emergency until January 21st, the day after the inauguration.

8am: Northern Ireland envoy and former White House chief of staff and Trump ally Mick Mulvaney announces his resignation from the part-time position. “I can’t stay,” he says, confirming he phoned secretary of state Mike Pompeo and resigned on Wednesday night.

10.30am: Military personnel erect black, non-scalable fences around the perimeter of the Capitol.

11.30am: Senate minority leader Chuck Schumer calls on Mike Pence to invoke the 25th amendment – the provision in the constitution that allows a sitting president to be removed. “This president must not hold office one day longer,” he says.

12 noon: The chief of the Capitol police, the force charged with protecting Congress, defends his handling of the protests, describes his officers as “heroic”.

1.30pm: Elaine Chao, transportation secretary and wife of Mitch McConnell announces her resignation – the first member of cabinet to do so.

1.50pm: Joe Biden speaks in Delaware. In a blistering speech, he lays the blame for Wednesday’s attack on the Capitol at Donald Trump’s feet. “For the past four years we’ve had a president who has made his contempt for our democracy, our constitution, and the rule of law clear in everything he has done.”

2pm: Nancy Pelosi calls for Trump to be removed through 25th amendment or the House may begin impeachment proceedings. She also calls on the head of the Capitol police to resign