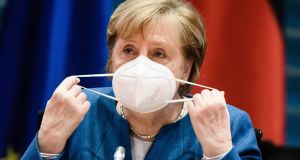 The decision on Ireland was taken at a meeting of senior officials in German Chancellor Angela Merkel’s administration. Photograph: EPA/Clemens Bilan

Air passengers to Germany from Ireland will be refused entry from Friday unless they can produce a negative Covid-19 test result.

The move, announced with two hours’ notice in Berlin on Thursday evening, means air travellers on German-bound flights will be refused permission to board on Friday - or stopped when they land in Germany.

Officials in Berlin insisted the emergency decision would not apply to road freight traffic.

The decision on Ireland was taken at a meeting of senior Merkel administration officials at the chancellery on Thursday evening, with the decision taking effect from midnight.

A German government official said Ireland had been on Berlin’s radar for some time, given the spike in infection rates since Christmas - and corresponding stark warnings from Chief Medical Officer Dr Tony Holohan.

The decision followed intense lobbying from Dublin to avoid a more drastic option that would have imposed a total travel ban from Ireland - and possibly endangered trade flows.

“Protecting Irish trade in a post-Brexit environment is paramount,” said one Irish Government source familiar with the Berlin deliberations.

European geography makes Germany a major artery for all trade heading east and south, and difficult for lorries to circumvent.

Despite avoiding a blanket ban, there was frustration on the Irish side that Berlin declined a grace period of even 48 hours, to avoid disruption and allow people get tested before flying.

On Tuesday, Chancellor Angela Merkel agreed in a video conference with Germany’s 16 federal state leaders to impose a two-test obligation on arrivals from risk countries.

That the new rules are being applied four days early for Ireland reflects huge concern in Germany over the new Covid-19 variant identified in the UK.

Germany’s first confirmed case of the variant was registered on Thursday in the eastern state of Saxony from someone who had returned from the UK. The traveller was in house quarantine when the test result came back positive for the new strain.

“The relevant health authority is taking care of the case and doesn’t see a risk of further spread,” said a Saxon state government spokesman.