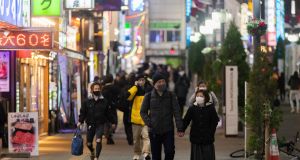 Japan has declared a “soft” state of emergency in Tokyo and three surrounding prefectures after a steady rise in coronavirus cases raised fears of breakdown in the capital’s medical system.

Under the declaration, which is in place from January 8th, prime minister Yoshihide Suga called for teleworking in order to reduce commuting by 70 per cent, and the voluntary closure of restaurants by 8pm.

Mr Suga asked the public to avoid going out unnecessarily in the evening and said there would be restrictions on sporting and cultural events. However, shops and schools will remain open.

The limited restrictions mark a bet that Japan can maintain its record of controlling Covid-19 using targeted local measures.

Making the declaration from the prime minister’s residence on Thursday evening, Mr Suga warned that cases had risen sharply over the new year holidays and appealed for public co-operation.

“Since the end of the [last] year, the number of new infections has been very high, exceeding 2,400 in Tokyo [on Thursday].” The prime minister rejected any suggestion that the restrictions were too little, too late. He said most untraced infections in Tokyo were linked to people dining out and hence it was the right target for restrictions.

The state of emergency would last for a month, he said. Daily new cases nationwide exceeded 7,000 for the first time on Thursday, according to initial reports by local media.

Throughout the coronavirus pandemic, Japan has sought to control infections without shutting down its economy, and the number of cases has risen more slowly there than in Europe.

Analysts said the economic impact this year amid the pandemic would be much smaller than in the spring last year. Economists at Goldman Sachs in Tokyo cut their growth forecast for the first quarter to almost zero, but forecast “a robust pick-up from spring onwards as Covid-19 vaccines begin to be administered”.

Takeshi Niinami, chief executive of Suntory, the drinks company, said the economic impact of the latest move would be limited given that business was already slow at this time of year and the government was expected to roll out additional subsidies for the service sector.

“But if this state of emergency expands to other areas, then the scenario will change and there will be significant impact,” said Mr Niinami, who is also a leading adviser to the prime minister.

Mr Niinami added that the Tokyo Olympics would probably go ahead if the coronavirus cases started subsiding by the end of February or early March. “The Olympics will be a key factor for Japan’s economy,” he said.

Mr Suga has insisted that the Olympics will go ahead as a symbol of humanity’s triumph over the virus. However, the fate of the Games remains in doubt, with Japan’s borders closed to non-residents. – Copyright The Financial Times Limited 2021