A man calls on people to raid the building as Trump supporters clash with police and security forces as they try to storm the US Capitol building. Photograph: Joseph Prezioso/AFP via Getty

The events that unfolded in Washington this week have prompted a recurring question: how could such a security breach take place in the US Capitol building?

Wednesday’s security failings have renewed focus on Washington DC’s unique status and the different layers of law enforcement that operate in the city. The District of Columbia is technically a district and not a state. Hence it lacks some of the powers and authorities afforded to the 50 states across the country.

These issues came into focus during last year’s Black Lives Matter protests when the city’s mayor, Muriel Bowser, clashed with President Donald Trump over the deployment of federal forces on the streets of Washington. The proliferation of federal buildings around the nation’s capital gives the federal government jurisdiction in certain areas.

Although the mayor controls the city’s police force, she also has access to a national guard – a part-time reserve force that operates in every state when needed. Under a legal quirk, she must seek permission from the defence secretary and secretary of the army to deploy these forces.

Earlier this week 370 members of the 1,000-plus DC national guard were mobilised in anticipation of unrest, but their role was mainly seen as back-up support to the police for tasks such as directing traffic.

In addition the US Capitol operates its own police force, which is answerable to Congress. The USCP (United States Capitol Police) comprises about 2,000 officers whose sole job is to safeguard Congress and its members and staff.

The Capitol Police were responsible for securing the Capitol building on Wednesday. Although the pro-Trump rally had been well flagged, the system collapsed as soon as protesters approached the building. 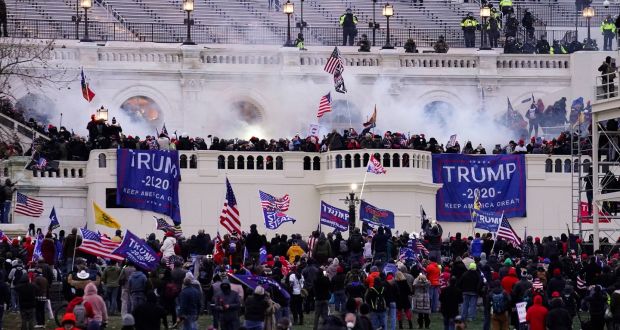 Footage shows protesters easily knocking the small barriers that were in place near the temporary risers and stands that have been erected for the presidential inauguration. They then scaled the inauguration stands and climbed the sweeping steps to the Capitol building, which are usually out of bounds to the public.

Some footage appears to show members of the Capitol police standing back as protesters entered the buildings; others scaled walls, broke windows and entered windows on the balcony. It then appears that some demonstrators, on entering, simply opened the doors to others.

Streams of people walked in, past the metal detectors, which were unmanned, and roamed the building, although there were some clashes, including in the historic rotunda, with one woman fatally shot.

The only aspect of the policing that appeared to work was the securing of the House and Senate chambers. Police successfully kept protesters outside and evacuated the members of Congress, though rioters later entered through the upper balconies.

Even as the intruders left the building, few arrests appear to have been made, with the agitators permitted to walk down the steps. The vast majority were from out of town. The head of the force, Steven Sund, defended his agency at a press conference on Thursday, describing his officers’ actions as “heroic given the situation they faced”.

Questions are also being asked as to why it took so long for back-up forces to be called. State troopers and the national guard were sent from the neighbouring states of Virginia and Maryland, while federal agencies also deployed forces.

There is some criticism that Mayor Bowser should have requested extra help earlier in the week, and suggestions that she was reluctant to see another heavy-handed enforcement situation such as the one that unfolded at Lafayette Square last summer.

There are also reports that vice-president Mike Pence, who remained with members of Congress throughout the day after the chambers were evacuated, did a lot of the work liaising with the defence department and federal authorities as Trump watched events unfold on TV in the White House.

Congressman Tim Ryan, who chairs a committee overseeing funding for the Capitol police, said he expected some personnel to be fired.

Bowser defended her handling of the situation, extending the public emergency in Washington until January 21st, the day after the inauguration.

The FBI appealed for anyone who witnessed Wednesday’s events to share information or social media recordings that may help their investigations.

Whatever the fall-out from Wednesday’s events, the images of the US Capitol under attack will leave an indelible mark on US political history.

3 Why does the small TUV party frighten the DUP so much?