Violent clashes erupt between opposition groups and Trump supporters in Washington after a support rally for US president Donald Trump. Video: Anadolu Agency 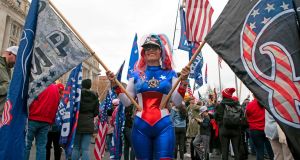 Electors meeting in the 50 state capitals and District of Columbia are set to confirm Joe Biden as the next US president following the supreme court’s rejection on Friday of one of Mr Trump’s final legal challenges against the result.

But with the outgoing president refusing to concede the November 3rd election, many of Mr Trump’s supporters continue to believe it was rigged, despite a lack of evidence.

Republican senators appealed on Sunday for their voters to unify, urging them to turn their attention to Georgia, where its two seats in the US Senate are both up for grabs in run-off elections to be held in January. The race will determine which party controls the US Senate.

Bill Cassidy, a Republican senator for Louisiana, told news channel CNN: “If we’re a nation of laws and this is the constitution and this is the law ... then Biden is going to be our next president.”

He added: “I noted yesterday that folks who said they were supporting President Trump in Washington were talking about tearing down the Republican Party. Others were saying defeat our two senatorial candidates in Georgia.

MOST CORRUPT ELECTION IN U.S. HISTORY!

How do states and politicians confirm an election where corruption and irregularities are documented throughout? A Swing State hustle!

“Our nation, our conservative movement, our party, cannot stand if it is divided against itself. So at some point we have to come together for all those reasons.”

Lamar Alexander, the outgoing Republican senator for Tennessee, told NBC television: “The courts have resolved the disputes. It looks very much like the electors will vote for Joe Biden.”

He added: “The most important thing for our country, as George Washington said when it was founded, is not the first election, but the second election – the orderly transfer of power. I think anything that detracts from that is not good for our democracy.”

Both senators were speaking the day after pro-Trump protesters clashed with police and counter-demonstrators in Washington, leading to four people being sent to hospital with stab wounds.

Mr Trump had welcomed the protests earlier on Saturday, tweeting: “Wow! Thousands of people forming in Washington (D.C.) for Stop the Steal. Didn’t know about this, but I’ll be seeing them! #MAGA.”

And he continued to rail against the election result on Sunday, tweeting that it was the “most corrupt election in US history”.

Senior Republicans are worried the outgoing president’s fight against the election results could detract from the party’s efforts in Georgia.

Mr Trump has railed in particular against Brian Kemp, the Georgia governor, who has been a staunch ally of the outgoing president, but incurred his wrath by resisting his calls to overturn the state’s presidential election result.

Meanwhile, Mr Trump has also renewed a separate fight with Senate Republicans, threatening once more on Sunday to veto a $740 billion (€610 billion) defence bill that cleared Congress last week. The bill has support from two-thirds of members in both the House of Representatives and the Senate, however, meaning they could override his veto should he impose it. – Copyright The Financial Times Limited 2020