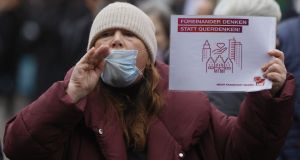 A protest against coronavirus restrictions in Frankfurt on Saturday. Photograph: Ronald Wittek/EPA

German high street retailers are braced for a stampede – and employers for a wave of sick leave calls – amid a Christmas shopping rush on Monday as a new lockdown closes non-essential shops from Wednesday.

Germany’s 16 state leaders agreed the lightning lockdown of schools and shops until January 10th during a one-hour video conference with Chancellor Angela Merkel on Sunday.

“The measures to date weren’t enough, we were forced to act and we are acting,” said a grave-faced Dr Merkel. “In the last days we have had exponential growth, and the health system is very much under pressure.”

The drastic decision to put public life in deep freeze means that from Wednesday most shops in Germany will be required to close, an exception being made for food and drink outlets. Other premises allowed to trade include pharmacies, petrol stations, opticians, bicycle shops, car showrooms and banks.

Battles for personal care appointments are likely to be intense as all hairdressers, cosmetic, massage and tattoo studios are forced to close their doors on Tuesday evening.

Tighter distancing rules apply for all religious services, while all states have banned the sale of fireworks and the consumption of alcoholic drinks in public in an effort to curtail crowds sipping mulled wine in public.

Travel abroad is not banned but strongly discouraged, while restrictions are also being placed on household visits.

Chastened German regional leaders said they had no alternative but to shutter shops nine days before Christmas.

“Corona is out of control,” said Markus Söder, Bavarian minister president. “It is the greatest catastrophe we have faced in the last 50 years, and therefore we need a national effort to tackle it: everything or nothing, no longer half-hearted measures.”

With someone dying in Germany from Covid-19 every three minutes, he said previous measures had flattened the rise of cases but were not enough “to lower them”.

“Increasing mobility and the corresponding contacts in the pre-Christmas period indicate a rising trend in the infection figures,” said a position paper agreed by the state leaders.

Germany’s federal health authorities sounded the alarm on Thursday: with daily infection and death rates above 20,000 and 600 respectively, the country was tipping once again into exponential growth.

Leading German retailers, who earn a fifth of their annual €500 billion turnover in December, said the lockdown would “seal, irreversibly, the insolvency of thousands of traders and the unemployment of millions of people”.

“The failure of corona politics must not be allowed become the death knell for German city-centre traders,” concluded a letter signed by leading retailers.

Many retailers – closed on Sunday – said they feared two days of chaos loomed from Monday.

Already forced to manage footfall amid tight store capacity rules, many high street stores have demanded permission to open for 48 hours around the clock to avoid crowds and queues.