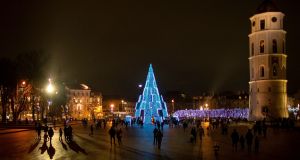 Cathedral Square in the Lithuanian capital, Vilnius. During lockdown, all non-essential shops will be closed and meetings between households banned. Photograph: Mindaugas Kulbis/AP Photo

Lithuania told citizens to stay at home for three weeks from Wednesday as it seeks to rein in a raging coronavirus spread that has seen the country jump from 18th to third worst-hit in the European Union in just six weeks.

Leaving home will be permitted only for work, essential shopping, caring for the sick, funerals and for people to take walks in single household groups, prime minister Ingrida Simonyte announced. All non-essential shops will be closed and meetings between households banned.

By that measure, the country now trails only Croatia and Luxemburg on the European Centre for Disease Prevention and Control’s list of worst-affected countries.

“There is no safe place in Lithuania,” Ms Simonyte told reporters after announcing the curbs at the first meeting of her government since being sworn in on Friday.

The country is overwhelmed by the fast pace of the virus’s spread and its health authority can no longer trace the ways contagion is occurring, the prime minister said.

“Numbers are frightening and saddening. We can no longer see what specific curbs could get result,” she said, explaining the new wide-reaching restrictions.

Several European countries have stepped up curbs on social contact as they fight surging infections ahead of the Christmas holiday season.

The Lithuanian government said that apart from the three-week lockdown, other restrictions such as closures of restaurants, gyms, universities and primary and secondary schools would continue until January 31st.