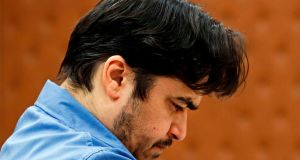 Ruhollah Zam was the son of a pro-reform Shia cleric and fled Iran. File photograph: Getty

Iranian dissident journalist Ruhollah Zam, who was convicted of fomenting violence during anti-government protests in 2017, was executed on Saturday, Iran’s state television reported.

France reacted with anger to the hanging of the Paris-based journalist, which it called “barbaric and unacceptable” and said ran counter to Iran’s international obligations.

Germany also criticised the execution, and on Sunday Iran’s foreign ministry summoned the ambassadors of both countries in response.

Iran said on Tuesday its supreme court had upheld the death sentence against Zam, who was captured in 2019 after years of living in exile in France. His Amadnews feed had more than a million followers.

The French foreign ministry said: “France condemns in the strongest possible terms this serious breach of free expression and press freedom in Iran. This is a barbaric and unacceptable act that goes against the country’s international commitments.”

The EU said: “The European Union condemns this act in the strongest terms and recalls once again its irrevocable opposition to the use of capital punishment under any circumstances.”

“RSF is outraged at this new crime of Iranian justice and sees [supreme leader Ayatollah] @ali_khamenei as the mastermind of this execution,” the group tweeted.

Amnesty International said it was “shocked and horrified” by Iran’s action.

“We call on the international community, including member states of the UN Human Rights Council and the EU, to take immediate action to pressure the Iranian authorities to halt their escalating use of the death penalty as a weapon of political repression,” said the rights group.

Zam was the son of a pro-reform Shia cleric and fled Iran, he was given asylum in France.

In October 2019, Iran’s Revolutionary Guards said it had trapped Zam in a “complex operation using intelligence deception”. It did not say where the operation took place.

Nour News, a news agency close to the Revolutionary Guards, said last week that Zam was detained by Guards agents after he travelled to Iraq in September 2019 and brought to Iran.

Iranian officials have accused the United States, as well as Tehran’s regional rival Saudi Arabia and government opponents living in exile, of stoking the unrest that began in late 2017 as regional protests over economic hardship spread countrywide.

Officials said 21 people were killed during the unrest and thousands were arrested. The unrest was among the worst Iran has seen in decades and was followed by even deadlier protests last year against fuel price rises.

Zam’s Amadnews feed was suspended by messaging service Telegram in 2018 for allegedly inciting violence, but later reappeared under another name. – Reuters

Exemption of vaccinated people from mandatory hotel quarantine being considered

Jordan’s Prince Hamzah to escape prosecution for involvement in alleged conspiracy 16:49
Biden strikes international deal in bid to stop migrants reaching US border 14:50
Johnson & Johnson delays EU vaccine deliveries as US pauses use over blood clots 12:51
Moscow warns United States to stay away from Russia, Crimea 11:15
How have other countries responded to concerns over the AstraZeneca vaccine? 10:56