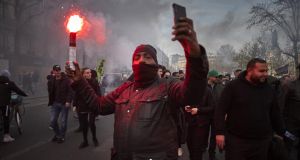 Protestors march at Place de la Republique as thousands take to the streets as strikes in France enter their third week with new unions joining the strike on a crucial day between the government and the unions over pension reforms on December 17th in Paris. Photograph: Kiran Ridley/Getty

French president Emmanuel Macron “is inclined to improve” a provision that would de facto raise the French retirement age from 62 to 64, the Élysée said on Wednesday.

The “pivot age” or “age of equilibrium” is intended to balance the budget for state pensions, which is currently running a €10 billion deficit. Trade unions are vehemently opposed to the measure.

Aside from this first indication of flexibility, the conflict over pension reform between large sectors of French society and the Macron administration appears frozen.

Mr Macron wants to meld France’s 42 different pension regimes into one universal system based on points rather than trimesters worked. He also wants to end the special regimes which grant early retirement to transport workers.

Though the final objective is clear, the government has failed to explain clearly how the transition will be carried out, or the future level of pensions.

There will be slight improvements in the transport situation on Thursday, the 15th day of the strike. Two out of five high-speed TGV trains will run, compared to one in three on Wednesday. Only six Paris metro lines will be completely closed, compared to eight in previous days.

Mr Macron has not spoken publicly about the reform since November 22nd. “This does not mean the president has withdrawn, is indifferent or absent. He is hovering above,” said a source close to Mr Macron. “He has mandated prime minister Edouard Philippe for this operational phase . . . The president will not abandon the project. Nor will he adulterate it. But he is inclined to improve it.”

Mr Philippe received virtually all French trade unions and the management syndicate Medef in a marathon series of meeting on Wednesday afternoon and evening.

He was accompanied by Laurent Pietraszewski, who was appointed overnight from Tuesday to Wednesday to replace Jean-Paul Delevoye, the architect of the reform who was forced to resign on Monday because he had failed to declare supplementary income.

Philippe Martinez, the secretary general of the hardline, neo-communist CGT, spent only 10 minutes in the prime minister’s office. “I told him that the longer the strike lasts, the more his power of persuasion will diminish,” Mr Martinez said.

“We have not changed our line. We demand the withdrawal of the reform and the renegotiation of the present system.”

The CGT later published its demands, which include retirement at age 60 with 75 per cent of former salary and the guarantee of at least €1,800, which is minimum wage, for all pensioners.

The electricity network RTE says the CGT illegally cut power to close to 170,000 homes in Bordeaux, Lyon, Nantes and Orleans on Monday and Tuesday.

Power was cut to France 24 television station on Wednesday. Francis Casanova, a CGT leader at RTE, said the cuts are “a first warning” and that “massive power cuts” could follow.