Trump is likely to face impeachment vote next week 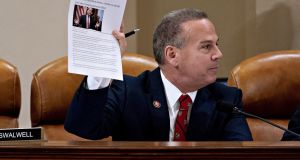 Senior Republicans have indicated that a short trial in the Senate is likely if Donald Trump is impeached next week, as the House of Representatives judiciary committee looked poised to approve articles of impeachment against the US president on Thursday night.

The committee spent Thursday debating the merits of the proposed legislation in a rancorous debate in the US Capitol, with the 41-member committee expected to vote to approve the two articles of impeachment.

The development would see Mr Trump become only the third president in US history to face an impeachment vote in the House of Representatives. Such a vote would most likely take place next week. However, the Senate has indicated that any subsequent trial in the higher chamber will be swift.

“If it goes over to the Senate, I don’t think it should have to last too long,” Kevin McCarthy, the most senior Republican in the House of Representatives, told journalists on Thursday, amid reports that Senate majority leader Mitch McConnell was seeking to keep any impeachment trial brief.

Under the US constitution, a trial is held in the Senate if a president is impeached by the House of Representatives. With Republicans holding 51 seats in the 100-member Senate, and a two-thirds majority needed to convict, it is highly unlikely that Mr Trump will be removed from office by the Senate if he is impeached.

Democrats are seeking to charge Mr Trump with two articles of impeachment – abuse of power and obstruction of Congress – over his dealings with Ukraine. At the heart of the impeachment inquiry is a July 25th phone call between Mr Trump and Ukrainian president Volodymyr Zelenskiy during which the US president asked his Ukrainian counterpart to do a him “favour” and investigate former US vice-president Joe Biden, a possible rival to Mr Trump in next year’s presidential election.

Thursday’s debate in the House judiciary committee seemed certain to result in a vote later that day to approve the two articles of impeachment against Mr Trump.

In a rancorous hearing that began at 7pm EST on Wednesday and resumed on Thursday morning, representatives of both political parties argued for and against impeachment on strictly partisan lines. An attempt by Republicans to remove the abuse of power article from the legislation was defeated at lunchtime, with debate continuing into the afternoon.

In an indication of the gravity of the moment, the nine-page resolution outlining the articles of impeachment was read into the record at the start of the hearing, a step that is sometimes skipped in usual mark-up sessions. “Donald J Trump has abused the powers of the presidency,” the clerk read as the hearing began.

Republican representatives denounced the impeachment process as a sham, with several echoing an argument made by the president in recent days that the charges against him were weak.

Louie Gohmert, a Republican from Texas, highlighted the fact that there were only two impeachment articles against the president. “Bribery and treason . . . those had to be dropped because there were no crimes,” he said. “This is a day that will live in infamy for the judiciary committee,” he continued, accusing Democrats of using the committee “to use taxpayers’ funds to defeat a president”.

His colleague from Texas, Democrat Veronica Escobar, however, argued that the president had committed a crime. “If a community suffers a natural disaster and the governor of that state has aid that will help that community, but calls the mayor of your community and says ‘I want you to do me a favour, though’. . . that governor would go to jail,” she said, referring to Mr Trump’s phone call with the Ukrainian president.