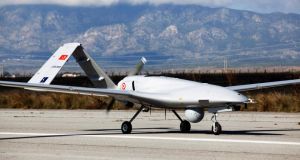 The Bayraktar TB2 drone is pictured on December 16th at Gecitkale Airport in Famagusta in the self-proclaimed Turkish Republic of Northern Cyprus. Photograph: Birol Bebek/AFP via Getty

A Turkish military drone has begun patrolling off Cyprus in support of Ankara’s natural gas exploration and drilling activities, which are regarded as illegal by the European Union and the United Nations.

Armed and unarmed drones deployed at an airport near the walled city of Famagusta in Turkish-occupied northern Cyprus will escort two drill vessels, the Fatih and Yavuz, which already have the protection of Turkish naval ships. Ankara has warned it will use force to halt any gas exploration or drilling in areas claimed by it.

Cypriot defence minister Savvas Angelides has said the government will cautiously continue to address Turkish provocations and claimed Turkey is seeking to destabilise the region.

While Turkish Cypriot officials welcomed the drone deployment, it was criticised by Turkish-Cypriot opposition parties. The Cyprus Socialist Party said the island should be cleared of foreign forces, while the Communal Democracy Party argued that Turkish-Cypriot parties should have been consulted before the decision on drones was taken.

Opposition newspaper Afrika quoted the head of the Turkish-Cypriot Teachers’ Union, Sener Elcil, as saying “Drone go home”, and criticising the government for allowing the airport to be used for military purposes.

Ankara insists it is defending the interests of both Turkey and Turkish-Cypriots by preventing EU-member Cyprus from exploiting offshore hydrocarbons.

The UN- and EU-recognised Cypriot maritime zone has been delineated in accordance with the law of the sea and international law and in agreement with Lebanon, Israel and Egypt.

The dispatch of the drones follows the conclusion of a pact with the UN-recognised Libyan government based in Tripoli. This deal extends Turkey’s unilaterally declared maritime economic zone to border that of Libya, effectively bisecting the eastern Mediterranean.

Turkey’s claim impinges on the economic zones of Cyprus and Greece and cuts off Cyprus, Egypt, Israel and Palestine from Greece and Italy and would impede the construction of undersea gas pipelines from east to west.

Turkey’s latest actions appear to be in response to the recent creation by these countries of the Eastern Mediterranean Gas Forum with the aim of asserting members’ rights to natural resources and co-operating in the exploitation of regional gas reserves.

There is concern in Cyprus that Turkey is using the dispute over hydrocarbons to gain leverage in or to torpedo potential negotiations to reunite Cyprus, which has been divided since Turkey occupied the north in 1974 following a failed Athens military coup.

As Turkey’s expanded zone infringes on the coastal shelf of the Greek island of Crete, Athens says it will defend its rights and argues the pact with Libya is unenforceable since the Tripoli government, which is tied to Muslim fundamentalist militias, is challenged by a rival regime in Tobruk as well as rebel forces. Cairo has issued an official protest.

It is feared Turkey seeks to change the balance of forces in the eastern Mediterranean. In addition to defining expanded economic zones with Libya, Turkey has pledged to send troops to Tripoli to defend the government headed by Fayez al-Sarraj against Egyptian and Emirati-backed rebels led by Gen Khalifa Haftar.