In an impassioned speech Michelle Obama has slammed Donald Trump's for his vulgar and lewd remarks on women. The First Lady was speaking at a Hiliary Clinton rally in Manchester, New Hampshire. 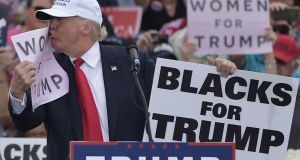 A campaign to revoke women’s right to vote in the United States is trending on Twitter after poll figures showed Donald Trump would win the election if only men were allowed to vote.

Using the hashtag #Reapealthe19th, the Republican nominee’s supporters are calling for a repeal of the constitutional amendment, ratified in 1920, which prohibits any US citizen from being denied the right to vote on the basis of sex.

The hashtag went viral after Nate Silver, editor of political number-crunching blog Five Thirty Eight, tweeted his latest findings on what the election results would look like if only one of the genders voted.

The poll finds that if only women voted, Hillary Clinton would win by an overwhelming 458 electoral votes to Mr Trump’s 80.

The poll also finds that if only men voted, Mr Trump would win by 350 electoral votes to Mrs Clinton’s 188.

A candidate must win 270 electoral votes to win the presidency.

The drive to bolster Mr Trump’s fragile campaign comes after a wave of claims about Mr Trump’s alleged sexual transgressions and inappropriate behaviour emerged this week.

Ever since video of the real estate mogul surfaced on Friday showing him bragging about how he could grab women’s genitals with impunity, more and more women have come forward to claim they were demeaned and touched inappropriately.

By late Wednesday evening the list of new allegations against Mr Trump included:

- Two Miss USA contestants who claimed Mr Trump deliberately walked in on them when they were naked in a dressing room.

- Two women who allege Mr Trump groped or kissed them without consent - one in the first-class seat of an aircraft.

- A claim by a woman that she was groped at a Trump event at his Mar-A-Lago estate in Florida.

- A People magazine reporter who says Mr Trump forced himself on her shortly before she was due to interview him and his wife in 2005.

- An incident in which Mr Trump appears to sexualise a 10-year-old girl.