May 8th, 2020: A father and son have been charged with murder in Georgia following widespread public outrage over the killing of a 25-year-old black jogger in February. Video: Reuters/ As credited 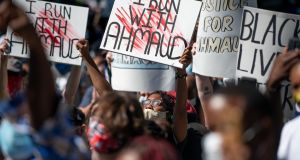 Demonstrators protest at the shooting dead of Ahmaud Arbery at the Glynn County courthouse in Brunswick, Georgia in May. Photograph: Sean Rayford/Getty Images

Rallies took place in the city of Brunswick, Georgia on Friday, after two men were arrested over the killing of a 25-year-old black jogger.

Ahmaud Arbery was shot dead in Brunswick on a Sunday afternoon in February, after two men pursued him in a truck, carrying a shotgun and a handgun.

But despite a police inquiry into the killing at the time, no arrests were made. Video footage of the shooting emerged on social media this week, prompting widespread public outcry.

On Thursday night police in Georgia arrested Gregory McMichael (64) and his son Travis (34).

Mr McMichael is a former police officer and investigator who retired last year.

According to the original police report filed after the incident, the elder Mr McMichael told officers that he believed that Mr Arbery was a person suspected of breaking in to several homes in the area. When he saw him jog near his house he called his son and the two pursued Mr Arbery in their truck. He alleges that his son called on Mr Arbery to stop, but then the jogger attacked him and shots ensued.

However, video footage that emerged showed that this was not the case. Travis McMichael appears to enter into an altercation with Mr Arbery. Three shots are fired and the victim falls to the ground.

The Georgia Bureau of Investigation confirmed that two men had been arrested. They were both charged with murder and aggravated assault and were taken into custody before being transported to the Glynn County jail. The director of the bureau of investigation said that the video was “compelling evidence”. “It was extremely upsetting,” he said. “On a human level, it’s troubling.”

The arrests followed growing outcry about the incident after the footage surfaced. Rallies in support of the deceased man, who would have turned 26 on Friday, took place across Georgia on Friday.

Asked about the case, President Donald Trump said: “It’ s a very disturbing situation . . . my heart goes out to the parents.”

Democratic presidential hopeful Joe Biden described the killing as a “grave injustice” during a videoconference event with African-American leaders in Florida on Thursday.

Earlier he tweeted: “The video is clear: Ahmaud Arbery was killed in cold blood. My heart goes out to his family, who deserve justice and deserve it now. It is time for a swift, full, and transparent investigation into his murder.

Speaking to CBS news this week, Mr Arbery’s mother said she hoped the video “proves that my son was not committing a crime. He was out for his daily jog and he was hunted down like an animal and killed.”

Actor Whoopi Goldberg was among those who called for Mr Trump to comment on the case.

The killing of Mr Arbery has revived memories of Trayvon Martin, a 17-year-old African American who was fatally shot in Florida eight years ago on his way home from a convenience store.

The case spawned the Black Lives Matter movement and threw a spotlight on the disproportionate targeting of black men by law enforcement officials.

Gun ownership is legal in the state of Georgia. It also operates a controversial “stand your ground” law which states that a person does not have a duty to retreat if he or she reasonably believes that force is necessary to defend him or herself.