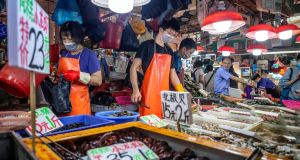 The European Union has been accused of caving in to political pressure from China to censor statements for the second time in a fortnight.

Chinese censors removed a reference to the coronavirus originating in China before spreading across the world in a letter authored by EU ambassadors calling for greater co-operation with Beijing.

The piece was published in the English-language version of state mouthpiece China Daily to mark 45 years of diplomatic relations between the EU and China.

In it, the ambassadors to China of all 27 member states and the EU delegation to Beijing jointly called for the conclusion of an investment deal, and said “the world needs the co-operation of Europe and China” on areas such as the coronavirus pandemic, climate change and peace.

A sentence reading “the outbreak of the coronavirus in China, and its subsequent spread to the rest of the world” was removed in the China Daily version, but appeared in copies published by the EU and by member states.

The European Commission said the EU’s ambassador, Nicolas Chapuis, had agreed to the change.

“The head of the delegation in China took a decision with great reluctance in view of a balance of interests,” a spokesperson said.

“China has state-controlled media. There is censorship. That’s a fact,” a second spokesperson said. “The EU delegation, as well as other diplomats in Beijing, works within the conditions and within the limits which are established by the Chinese authorities.”

Mr Chapuis told media the editing of the sentence had been “regrettable”.

China is engaged in a campaign to cast doubt on whether the coronavirus originated in Wuhan, with its officials promoting conspiracy theories that it began in the United States.

The commission has described the EU’s relationship with China as “complex”, saying it is a partner on issues such as climate change, but a political rival and competitor in economic areas, particularly technology.

The censorship incident comes less than a fortnight after controversy over the alteration of an EU report on Chinese and Russian disinformation.

Initial versions of the report leaked to media referenced a “global disinformation” campaign by Beijing, and mentioned Chinese criticism of the handling of the coronavirus pandemic by France.

But, after a delay in publication, the commission released a watered-down version with these references taken out.

EU officials anonymously told the New York Times and Politico Europe that the changes were the result of Chinese pressure. But the European Commission has denied this, and hit back by suggesting such reporting was itself “disinformation”.