Gaza amenities reopen for Ramadan as Covid-19 is contained 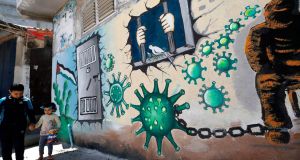 Gaza’s restaurants and cafes have reopened to permit Palestinians to celebrate both their success in containing the coronavirus and observe the tradition of dining out at night during the Muslim fasting month of Ramadan.

By quarantining Palestinians returning from abroad from its sole entry point via Egypt, the Hamas government has limited cases to 17, with 10 recoveries to date and no deaths. Palestinians who have remained in Gaza have not been infected.

Fearing communal spread among Gaza’s two million Palestinians, the health ministry insists that social distancing and hygiene must continue to be practised.

The reopening of restaurants and cafes is a highly popular step and the first in a gradual lifting of the closure of universities, mosques, schools, shops and other public places imposed six weeks ago by Hamas, which has ruled the narrow coastal strip since 2007 when Israel tightened its siege and blockade.

The head of the committee for restaurants, hotel and tourist services, Salah Abu Haseera, told AFP the ministry had responded to an appeal to open restaurants and allow 2,500 people to return to work.

Before the coronavirus outbreak employment in Gaza stood at 45 per cent, and 80 per cent of Gazans depended on international food aid.

Fear of the virus spreading has forced the authorities to adopt tough measures and initiate testing of people arriving in the strip. The spread of the virus in Gaza, one of the most densely populated areas in the world, would be catastrophic.

It is common for multi-generational families of 12 to live in two-bedroom flats in crowded neighbourhoods where streets are unpaved, electricity and water are rationed, and sanitation is poor.

Gaza’s health system has been crippled by lack of investment, equipment and medications, and decades of warfare. While volunteers and firms have made masks and gowns, the virus could overwhelm staff and victims due to shortages of drugs, equipment, tests and ventilators.

The World Health Organization (WHO) has provided test kits and a laboratory for processing tests but other international financial and material aid has been minimal. A US donation of $5 million (€4.6 million) has been directed to the West Bank.

The coronavirus tracking site Worldometer reports there are 325 confirmed cases among West Bank Palestinians. Two people have died and 73 have recovered. Unlike those living in Gaza, Palestinians in the West Bank have multiple contacts with Israelis and others from outside Palestinian enclaves administered by the Palestinian Authority.

It declared a national emergency on March 5th after hotel staff in Bethlehem caught the disease from Greek pilgrims. Foreign tourists were banned and mosques, schools, churches, public places were closed and a lockdown effected. Israel imposed closure on the West Bank.

The cash-strapped authority and its health system had no choice but to institute tough measures as they could not manage a major outbreak. Restaurants and cafes in the West Bank remain shuttered. Palestinian president Mahmoud Abbas has ordered the government to ease restrictions during Ramadan but warned that the threat of outbreak remains.

On Tuesday, Israel had 15,555 confirmed cases of the virus, 7,375 recoveries and 208 deaths, according to Worldometer.