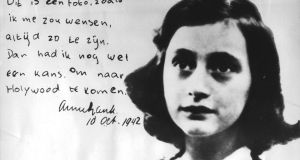 Anne Frank, the Jewish girl who wrote her world-famous diary while living in hiding in Amsterdam during the second World War. Photograph: AP

As the Netherlands celebrates the 75th anniversary of its liberation this week, the Anne Frank House – perhaps the country’s most famous symbol of Jewish resistance to Nazi occupation – has said it is “desperate” for financial support because of the impact of Covid-19.

The canalside museum in central Amsterdam – where the young diarist and her family went into hiding in 1942 and observed their own form of lockdown until they were found by the Gestapo on August 4th, 1944 – was forced to close when the pandemic hit and is now reviewing its finances.

Despite being Amsterdam’s second most-visited location after the Rijksmuseum, the house doesn’t receive any funding from the Dutch government or from the city council and supports itself entirely from ticket sales to its 1.3 million visitors a year, the vast majority of whom come from abroad.

In 2018, for instance, despite being closed for part of the year for renovations, the museum generated €11.2 million from entrance fees and another €4.5 million from its international education programme and touring exhibitions, which between them support a staff of more than 100.

“We are a fiercely independent organisation dedicated – as her father, Otto, was when he purchased this house – to spreading the memory of Anne Frank, and on that basis we have always carried our own weight,” said the foundation’s spokeswoman, Annemarie Bekker.

“However, we now estimate that when we re-open we’ll only be able to accommodate about 20 per cent of our usual numbers because of social distancing. That’s why we’re reaching out in search of financial support, 60 years from the day the Anne Frank House first opened its doors.”

Aged 15, Anne Frank wrote The Diary of a Young Girl – better known since as The Diary of Anne Frank – during her time hidden in a secret annex of the house on the Prinsensgracht with her father and mother, Otto and Edith, her elder sister, Margot, and four others.

Separated from her daughters, Edith Frank died of starvation in Auschwitz, aged 44, hiding scraps of food in case the three were reunited. Anne and Margot died in Bergen-Belsen, aged 15 and 19, probably of typhus.

Only Otto Frank survived, and when he returned to Amsterdam he managed to raise the money to buy his old office building to be preserved in his daughter’s memory as “a symbol of courage, hope, and trust in people, in the midst of the deadly threats of our times”.

The Anne Frank House opened in May 1960, and has flourished until this latest threat.

The Dutch museums’ association has warned that up to a quarter of the country’s cultural institutions could close this year in the absence of financial support from the government.