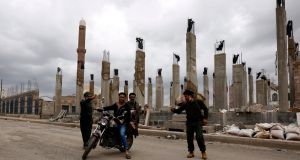 Yemeni policemen prevent people on a motorcycle entering a neighbourhood during an emergency curfew arising from the coronavirus pandemic, in Sanaa. Photograph: Yahya Arhab

Fearing a coronavirus outbreak in crisis-ridden Yemen, the United Nations Security Council has issued another urgent call for a ceasefire.

During a virtual meeting with Yemeni foreign minister Mohamed al-Hadrami and rebel Houthi spokesman Mohamed Abdel Salam, council representatives pressed both sides to accept UN proposals for a permanent ceasefire to enable the country to focus on the battle against the virus.

The Saudi-sponsored government has declared a Ramadan truce but the rebel Houthis have made a halt to fighting conditional on an end to air strikes on their forces and lifting of the blockade of their airports and ports.

Since the first Covid-19 case did not appear until April 10th, Yemenis celebrated when Ramadan, the annual Muslim fasting month, began on the 23rd despite warnings from humanitarian agencies that an outbreak could be catastrophic.

In the past week, 25 cases and five deaths have been recorded in southern provinces held by the Saudi-sponsored government and one death in the Houthi-controlled north, although it is suspected infections there are far higher.

Yemen is the world’s worst humanitarian disaster. Half the country’s health facilities have been destroyed during the five-year war waged by the Saudi-led coalition against the Houthis; 80 per cent of the population survive on international aid; and 100,000 have perished from hunger, cholera, dengue and other communicable diseases.

Yemen’s fight against the coronavirus has become complicated by division and politics. Yemen’s main urban centres are in the north, where 80 per cent of its 28 million people live under the Houthis, whose attempts to control aid have prompted the UN and other agencies to cut supplies by half.

After cancelling $85 million in aid to Yemen last month due to Houthi interference, the Trump administration pledged $225 million to the World Food Programme’s emergency operations in the south and north.

A secondary conflict is being waged between the government and the Emirati-backed secessionist Southern Transitional Council, which has occupied Aden, the government’s base, and declared self-rule there and in the southern provinces. They had been independent until uniting with the north in 1990.

Fearing the spread of Covid-19, the council has closed the three largest health centres in Aden, which are not equipped to treat the virus.

The World Health Organisation is in the process of delivering equipment to 37 “isolation centres” and training staff in case management . However, there are only four laboratories for testing and Yemen has only 208 ventilators, and the expectation of receiving a further 417. This number is far short of needs. Electricity cuts disrupt the battle against the coronavirus.

Although a de-escalation agreement is in the process of implementation, fighting between Saudi and secessionist forces erupts regularly, making the UN effort to negotiate peace all the more difficult.