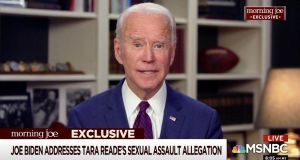 “I want to address allegations by a former staffer that I engaged in misconduct 27 years ago. They aren’t true. This never happened,” he said in a statement released on Friday.

Tara Reade, who worked for the then senator in the early 1990s, alleges that Mr Biden sexually assaulted her in 1993.

Mr Biden noted that while Ms Reade said she had raised issues with her supervisor and senior staff members, these individuals said that she never complained to them.

He also called on the secretary of the Senate to release any documents or record of any complaint related to the alleged incident at the National Archives.

“No, it is not true. I am saying unequivocally, it never ever happened. It didn’t,” he said later in an interview on MSNBC.

He said he did not remember any complaint being made. Pressed on whether he would release records housed at the University of Delaware, he said that these records did not contain any documents relating to personnel issues, and could be used selectively against him in the presidential campaign if they were released.

In his statement he outlined his record on women’s rights, noting that women who step forward “should be heard, not silenced”. But he added that their stories “should be subject to appropriate inquiry and scrutiny”.

“Responsible news organisations should examine and evaluate the full and growing record of inconsistencies in her story, which has changed repeatedly in both small and big ways,” he said.

Ms Reade, who now lives in North Carolina, worked for Mr Biden while he was a senator representing Delaware in Congress.

She was one of a number of women last year who accused Mr Biden of touching or hugging them inappropriately when he first announced his presidential run a year ago.

She subsequently alleged that he had assaulted her in a specific incident in 1993. She alleges that her former boss forced her against the wall and put his hands under her skirt and shirt and sexually assaulted her.

Mr Biden had been coming under mounting pressure to directly address the allegations which resurfaced this week after three individuals said that Ms Reade told them about the alleged incident – her brother, a former next-door neighbour, and a former colleague.

Ms Reade filed a criminal complaint with Washington DC police in early April this year, though the complaint did not mention Mr Biden by name.

Asked about the allegation, President Donald Trump said he thought Mr Biden should respond, but said the accusations could be false.

“I know all about false accusations. I have been falsely charged numerous times and there is such a thing,” he said, also referencing supreme court justice Brett Kavanaugh who he said was “falsely charged” with sexual assault allegations, describing him as “an outstanding man”.