British prime minister Theresa May said the Labour Party had yet to discuss a new approach to Brexit with her, unlike other party leaders. Video: 10 Downing Street 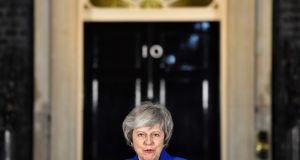 British prime minister Theresa May said the Labour Party had yet to discuss a new approach to Brexit with her and urged politicians to put self-interest aside to work to break an impasse over leaving the European Union.

“I am disappointed that the leader of the Labour Party has not so far chosen to take part - but our door remains open,” Mrs May said in a speech at Downing Street on on Wednesday night

Mrs May said she had talked to representatives from the Scottish National Party, Liberal Democrats and Welsh party Plaid Cymru. “This is now the time to put self-interest aside.”

Mrs May had earlier in the evening survived as prime minister after weathering a dramatic no-confidence vote in her government, but was left scrambling to strike a Brexit compromise that could secure the backing of parliament.

May announced after the vote on Wednesday night that she would invite Jeremy Corbyn and other party leaders for immediate talks on how to secure a Brexit deal, although Labour later said Corbyn would decline the invitation.

A day after overwhelmingly rejecting her Brexit deal, rebel Tories and Democratic Unionist party (DUP) MPs swung behind the prime minister to defeat Labour’s motion of no confidence by 325 votes to 306 - a majority of 19.

The prime minister immediately extended her invitation to opposition leaders, having pointedly declined to do so earlier in the day.

“I would like to ask the leaders of the parliamentary parties to meet with me individually, and I would like to start those meetings tonight,” she said.

Mr Corbyn responded by urging Mrs May to take a no-deal Brexit off the table, while the Scottish National party’s leader in Westminster, Ian Blackford, called on her to pave the way for a second referendum.

With just five days to go before Mrs May must make a statement to parliament setting out her Brexit plan B, Downing Street continued to indicate that she was not ready to budge on her red lines, including membership of a customs union.

Conservative politicians are deeply divided about how Mrs May should adapt her deal to win over hostile MPs.

The South Cambridgeshire Tory MP, Heidi Allen, said: “I thought she was incredibly brave [after the Brexit defeat] and it felt like she got that we need to change. But today it was: ‘I’ll talk to people, but my red lines are still there.’ And that’s not going to work at all.

“Maybe the prime minister needs a little bit longer but she has got to reflect: stop pandering to the hard right of my party and start talking to those of us who have been working across parties for months. We’re a functioning, collaborative body already. She just needs to tap into us.”

Some cabinet ministers clearly indicated the need for flexibility, with the justice secretary, David Gauke, warning that the government should not allow itself to be “boxed in”, and Amber Rudd suggesting a customs union could not be ruled out.

The DUP was quick to stress that without their 10 MPs, the government would have lost the confidence vote, and called on Mrs May to focus on tackling their concerns with the Irish backstop.

“Lessons will need to be learned from the vote in parliament. The issue of the backstop needs to be dealt with and we will continue to work to that end,” said Nigel Dodds, the party’s leader at Westminster.

No 10 said a no-deal Brexit could not be ruled out. “We will leave the European Union, our preference is with a deal,” Mrs May’s spokesman said. Asked if he was taking the no-deal option off the table, the spokesman said: “I am not.”

The Liberal Democrat leader, Vince Cable, accepted May’s invitation and was expected to meet her on Wednesday night.

After meeting party leaders, May is expected to extend the invitation to opposition backbenchers over the coming days, as well Tory Eurosceptics.

Related: What are the alternatives to May’s rejected Brexit deal?

“We want to find a way forward and we are approaching this in a constructive spirit,” Mrs May’s spokesman said. “We’ve set out the principles but clearly there is an overriding aim - to leave the European Union with a good deal - and we are open-minded.”

Civil servants and political staff are likely to attend the meetings, and ministers can direct civil servants to draw up more concrete plans where necessary but the talks will not have the same formal status as coalition negotiations.

Wednesday’s vote followed an ill-tempered debate in which Mr Corbyn accuse Mrs May of presiding over a “zombie government”.

“It is clear that this government are not capable of winning support for their core plan on the most vital issue facing this country. The prime minister has lost control and the government have lost the ability to govern.”

Labour’s deputy leader, Tom Watson, wound up the debate for his party by saying May would forever be known as “the nothing-has-changed prime minister”.

“No one doubts her determination, which is generally of an admirable quality, but, misapplied, it can be toxic,” he said. “And the cruellest truth of all is that she doesn’t possess the necessary political skills, empathy, ability, and most crucially, the policy, to lead this country any longer.”

The environment secretary, Michael Gove, responded with a robust speech widely regarded at Westminster as a leadership pitch, praising May’s “inspirational leadership” and attacking Corbyn on a issues from antisemitism to foreign policy.

“If he cannot protect the proud traditions of the Labour party, how can he possibly protect his country?” he asked.

One former Labour MP, John Woodcock, who resigned from the party after being investigated over sexual harassment claims, abstained from the vote, saying Corbyn was “unfit to lead the country”.

Had the motion passed, MPs would have had 14 days for an alternative government to emerge that could command a majority in the Commons, or a general election would have been triggered.

Corbyn is now likely to come under pressure from party activists to move towards supporting a second referendum. A group of more than 70 Labour MPs announced on Wednesday morning that they were backing the call for a “people’s vote”.

Labour’s formal position, adopted at its conference in Liverpool last year, commits the party to press for a general election. Failing that, all options are on the table, including that of campaigning for a second referendum.- Guardian News and Media /Reuters