Presidential transition officially starts as Trump bows to the inevitable 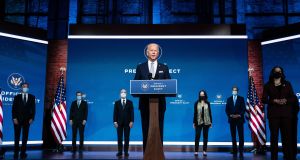 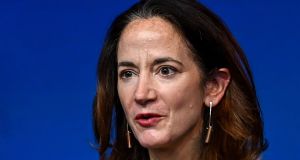 Avril Haines: will become the first female director of national intelligence when Joe Biden’s new team is confirmed by the US Senate. Photograph: Chandan Khanna/AFP/Getty

Three weeks after the US election, Mr Trump announced that he had instructed his team to “to what needs to be done” with regard to initial protocols – the first sign that he has accepted the election outcome.

But the outgoing president insisted he was not conceding to Mr Biden, pointing out that he would continue to “strongly” argue his case, and reiterating unsubstantiated claims of election fraud.

“I believe strongly we will prevail,” he said, a theme he continued on Twitter.

Mr Trump’s decision to formalise the transition followed the General Services Administration’s (GSA) move to recognise Mr Biden as the winner of the election. The federal agency responsible for overseeing the presidential transition had refused to designate Mr Biden as the apparent winner, preventing him from accessing resources and information.

But in a letter to the Biden transition team on Monday, GSA chief Emily Murphy said she had now made the ascertainment, noting  “recent developments involving legal challenges and certification of results”.

The Trump appointee said she had come to the decision “independently, based on the law and available facts” and was not pressurised by the executive branch. This conflicts with Mr Trump’s assertion that he had instructed the GSA chief to begin the process.

The formal sign-off from the GSA means that Mr Biden’s team will gain access to classified information, resources and $6.3 million in government funding as the president-elect prepares to take office on January 20th.

On Tuesday, health secretary Alex Azar said his team had reached out to Mr Biden and would co-operate on coronavirus strategy.

“We are immediately getting them all of the preprepared transition materials,” he said, pledging that the “transition planning and execution will be professional, co-operative and collaborative.”

As Mr Biden’s transition team prepares to engage with their counterparts in Washington, the president-elect introduced his new foreign policy and national security team at a press conference in Delaware.

A day after naming his nominees, Mr Biden declared: “America is back – ready to lead the world, not retreat from it.”

His officials will “not only repair but reimagine American foreign policy,” Mr Biden said, and “will tell me what I need to know, not what I want to know.

“This team will make us proud to be Americans,” he said.

In a marked break from Mr Trump’s “America First” policy, Mr Biden’s nominee for secretary of state, Antony Blinken, said that America needs to work with other countries.

“We can’t solve all the world’s problems alone,” he said.  But he also expressed confidence in America’s unrivalled ability to “bring others together to meet the challenges of our time”.

Alejandro Mayorkas, the incoming head of the department of homeland security, described how his parents had brought him to America as a child to escape communism in Cuba. He said it was the honour of his life to be nominated by Mr Biden.

“I will work day and night in the service of our nation,” he said.

Avril Haines, who will be the first female director of national intelligence if confirmed by the Senate, said she will never shy away from speaking truth to power.

Jake Sullivan, the incoming national security adviser, pledged to “keep our country and our people safe, to advance our national interests and to defend our values”.

Special envoy on climate change John Kerry said that while the Biden administration will rejoin the Paris agreement, “Paris alone does not get the job done.” Looking ahead to next year’s COP26 summit in Glasgow, Mr Kerry said: “Failure is not an option.”