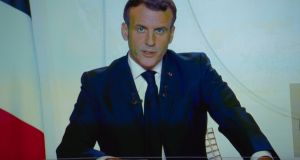 The second wave of the Covid-19 pandemic has peaked in France, president Emmanuel Macron said on Tuesday night when he announced a three-stage progressive reopening to begin next Saturday, November 28th, and continue until January 20th, 2021.

At the time of his previous televised address on October 28th, Mr Macron said: “We feared much worse figures.”

On November 16th, there were 33,500 patients hospitalised for Covid, more than in the first wave last spring. “We started decreasing slowly,” Mr Macron said.

The number of patients in intensive care units (ICU) has declined from 4,900 on November 16th to 4,300 on Tuesday.

Mr Macron emphasised the perhaps hypothetical unity of the French. He praised “our efforts, your efforts” and the “civic spirit” of his compatriots. Throughout his carrot-and-stick litany of slowly regained freedoms and continuing restrictions, he repeated the word “ensemble” – together – six times.

His goal is to stabilise the number of new infections at around 5,000 daily, and to reduce the number of persons in ICU beds to between 2,500 and 3,000.

The first stage of the reopening will begin next Saturday morning when a 1km zone of freedom will be extended to 20km. Inhabitants of France will be allowed to go out for up to three hours per day, instead of one hour at present.

However, people must continue to fill out a form for each outing, and to work remotely wherever possible.

They are to avoid private meetings, family gatherings and all non-necessary trips. Worship services may resume for a maximum of 30 people at a time.

All shops may reopen on condition they observe Covid regulations such as masks and social distancing.

If France reaches a goal of around 5,000 daily infections and fewer than 3,000 people in ICUs by December 15th, the lockdown will be lifted in the second phase.

People will be allowed to circulate freely, including between regions, and spend Christmas with their families. However, a 9pm until 7am curfew will remain in place, with the exception of Christmas and New Year’s eves.

Mr Macron appealed for a “sense of responsibility,” adding: “For sure, these will not be Christmas holidays as usual.”

He asked the French to limit the number of adults together in one room at the same time, but did not specify a maximum number.

Cinemas, theatres and museums will be allowed to reopen. However, large gatherings will be forbidden, along with any event that risks attracting crowds. Theme parks will remain closed.

The reopening of ski resorts will be planned in co-ordination with France’s EU partners and is unlikely before January.

Mr Macron said the third phase of the reopening would begin on January 20th because it would take two weeks to assess the consequences of the eased regulations over the holidays. “If the number of daily infections remains below 5,000, gyms and restaurants will be allowed to reopen and the curfew may be shortened.”

Lycées and universities will also reopen.

Mr Macron said the government would assess the situation every two weeks. “We must do everything to avoid a third wave and a third lockdown.”

He predicted that vaccinations would be available from the end of December or early January. “I will not make vaccination compulsory,” he said.