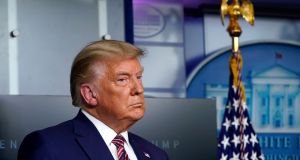 President Donald Trump: Pharmaceutical companies had run ‘millions of dollars of negative advertisements against me during the campaign – which I won by the way’.

US president Donald Trump claimed that he “won” the presidential election as he made his first public appearance in a week at the White House on Friday.

Speaking during a press conference on prescription drug prices, he said pharmaceutical companies had run “millions of dollars of negative advertisements against me during the campaign – which I won by the way, but you know, we’ll find that out. Almost 74 million votes.”

Mr Trump’s Democratic opponent Joe Biden was declared winner of the November 3rd election two weeks ago after securing the required number of electoral college votes. But the president has refused to accept the outcome.

Mr Trump’s appearance in the White House press room took place ahead of a meeting with Republican members of Michigan’s state legislature amid signs that the president is trying to encourage Republican-controlled states to certify the election for him even if Joe Biden won.

Earlier in the day, press secretary Kayleigh McEnany denied the meeting was related to his presidential campaign.

“This is not an advocacy meeting. There will be no one from the campaign there. He routinely meets with lawmakers from all across the country,” she said of the president.

Asked when Mr Trump was going to concede the election, she said: “There’s ongoing litigation. There are 74 million Americans that voted for this president; that’s more votes than any president has gotten in history. It’s really extraordinary. And there are very real claims out there that the campaign is pursuing,” she said, stating that individuals “deserve to be heard”.

The new focus by the Trump administration on states’ role in officially announcing the election result comes as states across the country prepare to certify the results in each state ahead of December 14th when the electoral college meets.

In Georgia, secretary of state Brad Raffensperger certified Mr Biden as the winner of the southern state’s 16 electoral votes following a recount. Republican governor Brian Kemp must certify the results by 5pm on Saturday, though it is possible that the Trump campaign could request a further recount. Mr Trump has already urged Mr Kemp to step in.

“Everyone knows that we won the state. Where is @BrianKempGA?” he tweeted last week.

In a highly unusual move, both Republican senators representing Georgia have called on Mr Raffensperger – himself a Republican – to resign, citing unsubstantiated claims of voter fraud. But Mr Raffensperger has refused. Announcing the results of the recount, he said that the numbers were correct.

“I live by the motto that numbers don’t lie,” he said on Friday, underlying the fact that he too is a Republican. “Like other Republicans, I’m disappointed our candidate didn’t win Georgia’s electoral votes,” he said.

“Let’s hope for the best,” she said. “Let’s hope that there will be enough Republicans that say, ‘this is America, the people’s voices count and that should be respected’.”

She was speaking ahead of her first meeting with Mr Biden since his election due to take place later on Friday.

Meanwhile, the president-elect’s top legal adviser Bob Bauer said that Mr Trump had “no chance” of overturning the result of the election.