Canary Islands struggle to cope with dramatic surge in migrants

Emergency camp set up as migrants continue to make crossing 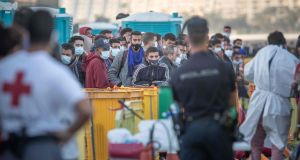 Migrants wait to be transferred to Red Cross emergency accommodations from the port of Arguineguin on the Spanish Canary island of Gran Canaria. Photograph: Desiree Martin/AFP/Getty

Spain is struggling to manage a migrant crisis on the Canary Islands, which in recent weeks have become a major destination for Africans attempting to reach Europe by sea.

On Monday, 170 migrants reached the islands, either of their own accord or having been picked up at sea by Spanish rescue services. This follows a surge in arrivals since the summer which has left local infrastructure unable to cope.

In recent weeks many of the migrants, the majority of whom are from north and west Africa, have been sleeping rough in the port area of Arguineguín, on the island of Gran Canaria. At one point over 2,000 people were crammed into the area, without basic facilities.

In response, the Spanish government has set up an emergency camp nearby which can accommodate 7,000 people. Many other migrants have been housed in tourist apartments recently.

Critics of the government’s handling have warned that Gran Canaria now resembles other European destinations which have become synonymous with migration.

“Would you go on holiday to Lesbos or Moria?” asked Ana Oramas, a congresswoman for the Canaries Coalition party, who said that the crisis is hurting the islands’ status as a tourist hub.

Just under 17,000 migrants reached the archipelago between January and mid-November, according to Spanish government figures, more than 10 times the equivalent figure in 2019. The islands have not seen such a high number of arrivals since 2006 and the current phenomenon is largely attributed to restrictions on other routes.

However, this route, which begins in countries such as Morocco and Mauritania, is particularly perilous and NGOs estimate that several hundred migrants have died in the Atlantic this year while making the crossing.

“It is clear that we could have handled this before and we could have had more foresight, but the important thing is to look ahead,” Spanish migration minister José Luis Escrivá said when visiting the island.

The foreign minister, Arancha González Laya, visited Senegal at the weekend, where she reached an agreement with authorities to resume the repatriation of undocumented migrants. Repatriation flights have been halted over recent months due to Covid-19.

Spain will also send an aircraft and a patrol vessel to Senegal to boost existing support it offers to the country’s coastal controls.

But beyond the logistical challenges created by this crisis, it has also triggered a political storm for the Socialist-led government.

Last week, confusion surrounding the removal by bus of more than 200 north African migrants from the Arguineguín port led to calls for the resignation of interior minister Fernando Grande-Marlaska. The Canary Islands wing of the Podemos party, which governs Spain in coalition with the Socialists, also called for his removal.

Mr Grande-Marlaska has said migrants in the Canary Islands will not be flown to the mainland as has happened in the past, in order to prevent the archipelago from becoming “an irregular door into Europe”.

Meanwhile, the far-right Vox party has called for a naval blockade around the islands to prevent more arrivals.

“In the face of the invasion, the state must defend itself with every means possible,” said the party’s spokesman, Jorge Buxadé.