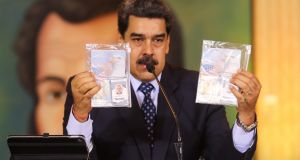 Venezuelan president Nicolas Maduro showing the passports of two US citizens arrested by security forces in his country after an alleged failed plot to capture him. Photograph: Marcelo Garcia/Venezuelan Presidency/AFP via Getty Images. 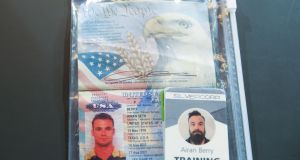 A handout picture released by the Venezuelan presidency showing the passport of arrested US citizen Airan Berry, during a video conference meeting with international media correspondents, at Miraflores Presidential Palace in Caracas on Wednesday. Photograph: Marcelo Garcia/Venezuelan Presidency/AFP via Getty Images.

An American mercenary captured after a bungled attempt to topple Nicolas Maduro has claimed he was on a mission to seize control of Venezuela’s main airport in order to abduct its authoritarian leader - and he alleged that was acting under the command of Donald Trump.

Luke Denman was one of two US citizens seized by Venezuelan security forces this week after what appears to have been a catastrophically conceived bid to overthrow Mr Maduro by sneaking into the South American country in a fleet of battered fishing boats.

In a heavily edited video confession, broadcast on Wednesday by the state broadcaster, VTV, Mr Denman said he had flown to Colombia in mid-January, where he was tasked with training Venezuelan combatants near Riohacha, a city 80km west of the Venezuelan border.

From there Mr Denman - who said he had never previously set foot in either South American country - claimed the group planned to travel to Caracas to “secure” the city and a local airport, before bringing down Mr Maduro.

There was no sign that any lawyers were present during Mr Denman’s alleged confession or that he was not speaking under duress.

Mr Denman said he had been working for Silvercorp, a Florida-based private security firm run by Jordan Goudreau, a former US special forces soldier who on Sunday claimed his 60-man team had launched “a daring amphibious raid” designed to overthrow Mr Maduro.

Mr Denman, from Austin, Texas, was detained alongside another American, named as 41-year-old Airan Berry, and 11 others. Eight other alleged “mercenary terrorists” were killed.

Speaking on Wednesday, Mr Maduro painted the failed invasion as a 21st-century version of the failed US invasion of Cuba at the Bay of Pigs and claimed the intruders had been working for Trump.

“Donald Trump is behind all of this,” Venezuela’s authoritarian leader said, brandishing a contract allegedly showing that the mission had been commissioned by his rival, the opposition leader, Juan Guaido.

“Here is the contract. Here are the signatures ... a contract for the invasion of Venezuela. A serious offense,” Mr Maduro said, holding up a Washington Post article which also branded the operation “a Bay of Pigs-style fiasco”.

Mr Guaido has denied any links to the incursion.

Mr Maduro claimed Mr Trump had “subcontracted” the “disastrous” invasion so as to be able to “wash his hands” of the episode if it went wrong.

“They came to Venezuela thinking the people would greet them like some kind of Rambos, with applause,” Mr Maduro said on Wednesday. “But the Venezuelan people...captured them, tied them up and the police had to intervene so there were no acts of violence against them.”

Mr Maduro claimed Venezuela’s justice system would decide whether or not Mr Guaido would be arrested.

In Washington, the US secretary of state, Mike Pompeo, said the US would “use every tool” to get the two captured Americans back, and raised eyebrows by saying there was no US government “direct” involvement in the strange raid.

“If we had been involved, it would have gone differently,” Mr Pompeo told reporters shortly before Mr Denman was shown on Venezuelan state television.

“As for who bankrolled it, we’re not prepared to share any more information about what we know took place. We’ll unpack that at an appropriate time. We’ll share that information that makes good sense.”

Asked about what action the administration would take, the secretary of state said: “We will start the process of trying to figure a way - if in fact these are Americans that are there - that we can figure a path forward. We want to get every American back. If the Maduro regime decides to hold them, we’ll use every tool that we have available to try and get them back. It’s our responsibility to do so.” - Guardian