Trump critical of ‘corrupt media’ in broadside at rival Biden 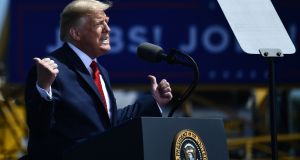 US president Donald Trump hit out at the “corrupt media” as he criticised Joe Biden for not taking more questions from journalists during the election campaign.

As the Democratic party prepared to hold the first events of its annual convention on Monday night, Mr Trump hit the campaign trail, leaving Washington for rallies in Minnesota and Wisconsin.

Speaking to supporters in front of Air Force One shortly after landing in Minneapolis, Mr Trump chastised his Democratic rival for “staying in his basement”. He said that Democrats’ sympathy “lies with lawbreakers and criminals”. In contrast he said his sympathy was with “the great men and women of law enforcement who are treated very badly”.

Mr Trump did not visit the site where African-American man George Floyd died in May, prompting nationwide protests. Instead he praised law enforcement for protecting Minneapolis, criticising the mayor of the city. He said the national guard should have been called in to protect the city during the protests. He also met with small business owners who he said were “victims of the violence and destruction on the streets of Minneapolis” in the wake of Mr Floyd’s death.

“All they wanted was to live the American Dream,” he said. “Their dreams were burned to the ground.”

The U.S. Post Office (System) has been failing for many decades. We simply want to MAKE THE POST OFFICE GREAT AGAIN, while at the same time saving billions of dollars a year for American Taxpayers. Dems don’t have a clue! @USPostOffice911

Earlier Mr Trump phoned into the Fox News programme Fox and Friends where he criticised the media. “My biggest opponent isn’t Biden. It’s not the Democrats. It’s the corrupt media,” he said. “We have a corrupt media in this country the likes of which no one has ever seen before.”

He said Mr Biden is “shot” and his vice-presidential running mate Kamala Harris “don’t like oil, guns or religion”.

He expressed confidence that he would beat Mr Biden in November, describing yard signs supporting his presidency countrywide.

Mr Trump was speaking as a new CNN poll showed that Mr Biden’s lead has tightened somewhat – 50 per cent of registered voters back Mr Biden, compared to 46 per cent for Trump, a smaller margin than previous polls and within the four-point margin of error.

Mr Trump also continued his attack on mail-in voting as House Speaker Nancy Pelosi recalled the House of Representatives to vote on legislation on funding the US postal service on Saturday. Postmaster general Louis De Roy will testify next Monday before the House Oversight Committee.

“This universal mail-in is a very dangerous thing. It’s fraught with fraud and every other thing that can happen and we have to be very, very careful,” he said as left for Minnesota. “We have a very big election coming up. I think we’re going to do very well. And I want to make sure the election is not stolen, and so does everybody else.”

As controversy continued about funding challenges facing the postal service, less than three months before an election that is likely to be marked by an increase in postal voting, Mr Trump said that the post office system had been “failing for many decades”.