Addressing the Democratic Party Convention, former US president Barack Obama has delivered a scathing attack on Donald Trump’s presidency, urging Americans to vote for Joe Biden to “lead this country out of these dark times”. Video: Reuters 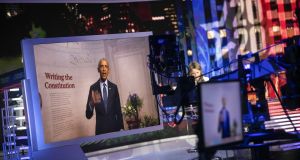 Former US president Barack Obama has delivered a scathing rebuke of Donald Trump’s presidency, as he urged Americans to vote for Joe Biden to “lead this country out of these dark times” and restore America’s standing in the world.

Delivering a speech from the Museum of the American Revolution in Philadelphia on the third night of the Democratic National Convention, Mr Obama accused Mr Trump of treating the presidency as “one more reality show that he can use to get the attention he craves”.

Warning that “what we do these next 76 days will echo through generations to come”, he noted that he had sat with both Mr Biden and Mr Trump in the Oval Office.

“I did hope, for the sake of our country, that Donald Trump might show some interest in taking the job seriously; that he might come to feel the weight of the office and discover some reverence for the democracy that had been placed in his care. But he never did.”

In a speech that was sometimes emotional, he continued: “For close to four years now he’s shown no interest in putting in the work; no interest in finding common ground; no interest in using the awesome power of his office to help anyone but himself and his friends; no interest in treating the presidency as anything but one more reality show that he can use to get the attention he craves.”

Mr Obama said: “Donald Trump hasn’t grown into the job because he can’t. And the consequences of that failure are severe. 170,000 Americans dead. Millions of jobs gone. Our worst impulses unleashed, our proud reputation around the world badly diminished, and our democratic institutions threatened like never before.”

Mr Trump responded to Mr Obama as he was delivering his speech, tweeting in all-caps: “WHY DID HE REFUSE TO ENDORSE SLOW JOE UNTIL IT WAS ALL OVER, AND EVEN THEN WAS VERY LATE? WHY DID HE TRY TO GET HIM NOT TO RUN?” – a reference to Mr Biden.

In her acceptance speech, delivered to a mostly empty hall in Delaware as the party’s convention continued in its virtual format, Ms Harris described her family background and the influences that have shaped her professional and political career. In an apparent reference to the recent “birther” conspiracy theories embraced by some on the right, she described how her mother gave birth to her in a hospital in California.

“I keep thinking about that 25-year-old Indian woman, all of 5 feet tall, who gave birth to me at Kaiser hospital in Oakland, California,” she said.

She also attacked the current US administration. “Donald Trump’s failure of leadership has cost lives and livelihoods,” she said, noting that black, Latino and indigenous people were dying disproportionately from coronavirus.

The president also responded to her speech on Twitter. “BUT DIDN’T SHE CALL HIM A RACIST??? DIDN’T SHE SAY HE WAS INCOMPETENT???,” he tweeted, referring to last year’s debate when Ms Harris confronted Mr Biden about his past positions on racial justice.

Earlier, former US secretary of state Hillary Clinton, who lost the 2016 election to Mr Trump, urged people to cast their votes in November.

“Remember: Joe and Kamala can win 3 million more votes and still lose. Take it from me. We need numbers so overwhelming Trump can’t sneak or steal his way to victory,” she said.

“For four years, people have said to me: ‘I didn’t realise how dangerous he was’; ‘I wish I could go back and do it over’; ‘I should have voted.’ This can’t be another woulda-coulda-shoulda election. If you’re voting by mail, request your ballot now, and send it back as soon as you can. If you vote in person, do it early. Bring a friend and wear a mask. Become a poll worker.”

The two-hour convention also focused on a number of policy issues, including climate change, gun violence and immigration. In one of the most powerful moments of the night, former congresswoman Gabby Giffords, who was shot in the head in 2011 at a public event and still struggles to speak, delivered an address. “America needs all of us to speak out even when you have to fight to find the words,” she said.

Another segment heard directly from families impacted by Mr Trump’s immigration restrictions. Estela Juarez, whose mother, the wife of a US marine, was deported in 2018, read a letter to Mr Trump asking him to help reunite her family. “My mom is a good person, and she’s not a criminal,” she said. “Now my mom is gone and she’s been taken away from us for no reason at all.”

There was also a strong female theme to the third night of the convention which witnessed only the third woman in US history to be nominated by either party as vice-president. Among the women who addressed the convention were House speaker Nancy Pelosi and senator Elizabeth Warren, who spoke about the importance of childcare for women – particularly in light of the coronavirus pandemic.

The convention concludes on Thursday night when Mr Biden will deliver his acceptance speech from Delaware.